Amanda has always loved reading and writing. It wasn’t until recently, though that she had the resources to transform the bedtime stories she shared with her kids into a book. The Traveler’s Trunk series is a time-travel adventure featuring three cousins, who in reality are named for two of Amanda’s children and the son of a very dear friend. Pirates Treasure, the first book in the series, was released in August 2009, and Amanda plans to launch the next book in late summer 2010. With the help of her kids, they’ve put together ten adventures for the series.

In addition to being a Mom and author, Amanda is the founder of Traveler’s Trunk Publishing. She is a member of the Society of Children’s Book Writers and Illustrators.

RT: Ahoy, Amanda! Thanks for stopping by the Reading Tub®. You just released your first book, Pirate’s Treasure, about two months ago. I saw in your local newspaper that you held the book launch at your house! Wow! How did it go?
Amanda: It was great! My illustrator Jamie Pogue also flew in from Pennsylvania for the event. This was especially neat since Jamie and I hadn’t officially met until then. We had live music performed by a local band, Ars Nova. They did a wonderful job and kept the music fun and upbeat which really added to the ambiance. The turnout was a little smaller than expected, but it was 65 degrees and raining, so, I’m especially thankful for those people who did come out. There were a lot of family and friends there to support me, along with a few locals who came to see what it was all about. 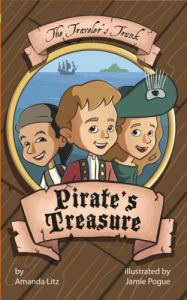 We set up a recreation of Grandma Addy’s attic in my garage, complete with its own traveler’s trunk. This was a big hit with the kids. They really seemed to enjoy trying on all the different costumes and pretending to take their own adventures with the trunk. I had several parents email me after the event to tell me how much their kids were enjoying the story. I think that was my favorite part of the whole thing.

RT: Pirate’s Treasure is about three cousins who find a steamer trunk in Grandma Addy’s attic. From there, they find themselves in the middle of a pirate adventure. On your website you explained that the book came from stories you used to tell your kids. Back then, did they add to the stories or just listen?
Amanda: Oh, they most definitely added to the stories. They had to make sure that I was telling it just right. If the story wasn’t going exactly like they thought it should, they would interrupt to let me know what would really happen. They would say something like, “Mom, that’s not how I would do it, I would do this instead.” Then they would wait for me to retell it the way they wanted it and see where the story went from there.

RT: Now that the kids know you’re writing books, do they have ideas about the kinds of adventures Sierra, Jacob, and Brent should have? Did they have a favorite that they wanted you to tell them over and over?
Amanda: Yes, they have been a great inspiration. I have the basic outline for 10 books in the series and the kids helped me think of most of them. It was a lot of fun. We spent a couple hours brainstorming about all the different adventures Jacob, Sierra, and Brent could have. Some were incredibly silly or just plain weird, but some of them were great ideas that I think kids will really enjoy reading about. I’m not sure that there was a favorite story overall. They seemed to really enjoy all the stories, but I probably told the pirate one more than any other. I image that’s why I started with that story in the series.

RT: In the first book, the adults – even Grandma Addy – are really peripheral to the events. Given that this is Grandma’s special trunk, will we get to know more about her in the next book?
Amanda: Not only will you learn more about Grandma Addy, but you will also learn more about the trunk itself. In each of the following books in the series I plan to reveal a little more about the trunk and the family members it has traveled with, and there are a lot. This trunk has been with the family for several centuries.

RT: When you think about people reading your book, what “scene” do you see in your mind’s eye?
Amanda: There are two different scenes: one if I’m imagining a child old enough to read on their own; the other if it is a parent reading to a younger child. In the first scene, a kid lays on his belly with his legs swinging in the air. He is intently focused on the book, quickly turning pages to see what happens next, and facial expressions that change back and forth from inquisitive to happy.

In the second scene, I picture a child curled up on the couch leaning into their parents’ side as they listen intently. Then they suddenly jump up in excitement to act out the scene on the pirate ship. That’s what my son always did and it made me so happy to see how much he was enjoying the story.

RT: Each month, you publish (with permission) a child’s story about the adventure s/he would have with the Traveler’s Trunk. Have you gotten lots of submissions? Do they come from children just in your area?
Amanda: Right now there have been very few submissions and the ones I do receive all come from my local area. I think this is probably because not many people/kids are aware of this opportunity yet. I’m hoping that once I start doing author visits that kids will become more aware and interested in writing these or any other stories.

RT: Along a similar line, what is your goal for encouraging the kids to write stories? Do your kids like to write?
Amanda: My goal is simply to inspire kids to write what they enjoy by helping to teach them the skills needed to write a story. Trying to write a story from scratch can be very overwhelming, so, I have several brainstorming activities for kids, including character and plot development. Together, we figure out who the characters are, where it is set, the problem, the solution, and the ending. Then we add story boards to depict the story along the way. These activities will give them all the information they need to actually write the story.

My daughter really enjoys writing. It is one of her favorite parts of school and sometimes she just writes stories at home for fun. My oldest son, not so much. He definitely gets into writing the story if he has to and he’s quite creative, but he wouldn’t do it just for fun. He’s more of a video game kid. As for my youngest, he’s just learning not to eat the stories. He does like being read to though.

RT: Do your children like the same kinds of books that you did as a kid? What were some of your favorites? 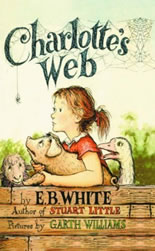 My kids don’t really like the same kinds of books that I did as a kid. My son is more into video game manuals, sci-fi adventures, or humor, like Diary of a Wimpy Kid. My daughter likes all the social drama with kids at school or with their friends, like Junie B. Jones and Ready Fready. I was more into survival stories or stories about animals. Some of my favorite childhood books were White Fang, Call of the Wild, Island of the Blue Dolphins, and Charlotte’s Web. I didn’t really start to appreciate fantasy books until I was an adult. Now it is one of my favorite genres to read and write.

RT: Can you tell us about Traveler’s Trunk Publishing? Is it just for your series or will you be accepting manuscripts from other children’s authors?
Amanda: For now, Traveler’s Trunk Publishing is just for my books. This is for two reasons. First and most importantly, while I’m learning the publishing business I would rather experiment with my own work so that no one else is at risk due to my lack of experience. Also, I simply don’t have the capital right now to accept anyone else’s work. In the future, once I’ve learned all the ropes of the business, and if my books sell well enough to provide a decent advance to an author, than I would like to open Traveler’s Trunk Publishing up to the public. Time will tell.

RT: Is there anything else you’d like to add?
Amanda: I’d just like to wrap everything up by saying that I have really enjoyed writing my book. I am excited about the future and the books I’m currently working on. It has been such a treasure to have the opportunities that I have had to pursue my writing, and I hope that all of those who decided to read my book will get as much enjoyment out of reading it as I did in writing it. That’s what it’s really all about anyway, providing a wonderful story that will bring joy and inspiration to all who read it.

Ways you can connect with Amanda