When you mention kids or music to Cathy Bollinger, she lights up. As a high school senior, she learned (via a career planning assessment) that music therapy was her destiny. She didn’t know what it was … but clearly the assessment was right!

Cathy founded Rivanna Music in 1988. In 2004, when Cathy started working on an album for Autistic children, educator Elly Tucker came on board. Cathy’s music therapy expertise and Elly’s background in developmental issues with children have combined to create music that helps children learn various skills. Their songs offer universal lessons and are carefully crafted to encourage learning and success not just by listening, but by engaging all of your senses.

Cathy’s work receives wide acclaim from kids, parents, and educators alike. In each of the last three years, she has won a Parent’s Choice Award. In 2005 it was for Toddlin’ Tunes and My Turn, Your Turn (which was also a 2005 Parenting Magazine Pick; in 2006 her CD Alphabet Jam won; and in 2007 it was Ready to Learn! that took the honors. Cathy’s work has also received the National Parenting Publications Award (NAPPA) for children’s music, and been praised by Booklist (American Library Association), School Library Journal, and Autism Spectrum Quarterly.

In addition to writing music and performing, Cathy also holds songwriting and teacher workshops. She has led workshops for public libraries in New York; the Core Knowledge Foundation; and Virginia Public Schools and Title I Programs. Cathy and Elly were invited as Keynote Address by The Wyoming Children’s Action Alliance for their STARS Conference (Statewide Training Resource System).

I met Cathy not long after we moved to Charlottesville in 2005. Through my daughter’s Occupational Therapist (OT), I had learned about Your Turn, My Turn, a CD to help autistic kids who struggle with social skills. When I saw that Cathy lived in Charlottesville, I wanted to meet her and learn more about her craft.

RT: Wow! A lot has happened since we spoke that first time in the fall of 2005! Not only have your CDs garnered Parent’s Choice Awards three years in a row, but you’ve received accolades from the book industry, too!  When you set out 20 years ago with your Masters in Creative Arts Therapy did you ever think you’d become a rock star?

Cathy: Well I’ve found life never goes exactly the way you plan it. My kids would definitely get a big chuckle out of me being called a rock star!

RT: In addition to being a performing artist, you are also a music therapist. When it comes to creating music that teaches, do you find that you write different ways for different audiences, or are the needs of the 2 to 7 audience fairly universal? 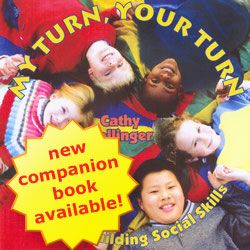 I’d have to say yes and no. When I began working on my CD My Turn, Your Turn I started to think differently about the way I phrased my lyrics. Because I was trying create a CD that could be beneficial for kids with autism I began to write lyrics in the first person and tried to keep them as literal as possible. This can be hard when you are working within a certain rhyme scheme. Many of the choices I might have used were figures of speech which could detract from the song meaning. It really caused me to stretch my creative abilities. I also wrote the songs using more of a social story format. I have always used a lot of children in my music but with My Turn, Your Turn I brought in more individual children’s voices. I felt it would be beneficial to hear children’s voices modeling some of the behaviors I was trying to teach. Bringing more kids into the songs brought the music even more to life!

When I created Ready to Learn many of the songs were part of a project I did for the Core Knowledge Foundation and I had specific points I had to cover in each song. For instance, for “The Listening Song” I was told to include: 1) Eyes forward; 2) Hands folded in lap; 3) Mouth closed; 4) Ears open.

With each CD I learn new techniques that I may incorporate into the next project. My goal with all my work is to create music that speaks to kids with and without disabilities. No matter whom the project is for I want the music to be fun, upbeat, infused with humor, and full of joy.

RT: In general, your music teaches kids ages 2 to 7 social and reading skills that will help them be successful learners. You have described your work as “multisensory songs.” Can you tell us what you mean?

Cathy: People often don’t realize that music is a multisensory experience. Even though music is being primarily perceived through the auditory sense, sound waves are being perceived by the tactile sense. If children are singing with others, the visual senses are being stimulated as they watch others sing or play instruments. Lyrics are included with all the songs and picture symbols can be downloaded for some of the My Turn Your Turn songs, too. Hand and body movements are also available for the songs on Alphabet Jam.

RT: When we spoke four years ago, you were just starting to work on Alphabet Jam. You talked about writing a song for each letter that moved beyond the traditional alliteration to expand the listener’s understanding of all the sounds a letter can make. For example, “When Y is at the End” covers both the beginning and ending sounds a Y can make. Once you started parsing the sounds, how hard was it to get your concept to work?

Cathy: I talked with a lot of teachers as I was developing this CD and decided to choose the sounds that are the first ones taught. For example the hard “g” sound verses the soft “g.” The vowel songs primarily included the short vowel sounds because they are harder to learn. The feedback that I got indicated that the vowels were often harder to grasp so I included an extra song for each vowel, as well as “The Vowel Family” song. Because so many kids have the letter Y in their name it seemed appropriate to include a song about this. I’d love to do a CD at some point that teaches some of the other sounds and blends. Alliteration is so much fun!!

RT: In addition to writing original music, you have also done albums with traditional, well-known children’s songs. What are the things you look at when you’re putting together an album? Oops, I mean CD. 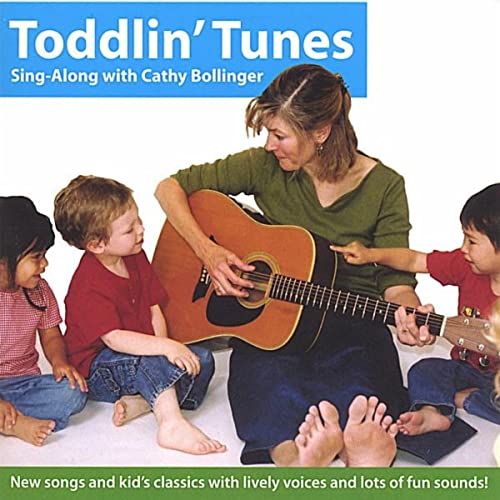 I love taking a well-known traditional song and adding a twist to it. I have done it several ways. For “Five Little Monkeys,” I used different instrumentation. With “The Muffin Man” I brought in a men’s a capella group to use different voices. I have also added extra lyrics. In my version of “The Itsy Bitsy Spider,” the spider meets Biggie Wiggie and Teeny Weenie.  I think it’s always beneficial for kids to hear a wide variety of styles and instrumentation.

RT: How did you get interested in music therapy? Do you see any changes or trends in the field?

Cathy: When I was in high school my parents enrolled me in a career planning program through our church. After weeks of meeting one on one, followed by a half day testing session at Mary Baldwin College, we were notified that the best career for me was music therapy. Our initial response was “What’s music therapy?” This began an exciting adventure discovering the many powers of music. Music Therapy continues to gain recognition as more and more data is gathered measuring its positive effects on different populations. A great site to learn more about music therapy is www.musictherapy.org.

RT: Rhythm, Rhyme, and Repetition is a workshop you created for early elementary educators. Based on the questions you receive, what do you think teachers and librarians see as the most pressing issues in helping kids become successful learners?

Cathy: Most of the preschool and early elementary teachers that I meet in my workshops are upbeat, dedicated educators always looking for new ways to inspire their students. I think trying to address varying needs in a large classroom is one challenge they have. This brings me back around to music. It is universal and can often bridge gaps between different types of learners.

RT: Although you have been performing for 20 years, the music industry itself has changed. Have you noticed any change in the formats fans want for listening to your music (e.g., downloading v. buying CDs)?

Cathy: The children’s music industry seems to be about four or five years behind the adult music industry. When most adults were buying CDs for themselves many of them were still purchasing cassette tapes for their children, probably because they still had cassette players in their cars and in their children’s rooms. Now of course it’s rare for me to sell cassettes. At this point I have some people requesting downloads but many of them still want an actual CD. I’m sure this will change over the next couple years.

RT: Can you tell us about your next project?

Cathy: I am in the process of creating a new CD with my 21-year-old son Ross. The project is really exciting for me on a couple different levels! We have co-written nine of the 13 songs and plan to record them this fall. The songs are fun, very humorous, and address different concepts from sportsmanship to figures of speech. We use the mother-son relationship to demonstrate how we may have different ideas about things but we can still work together and get along. Ross is a fabulous musician and entertainer; and I am really looking forward to performing more with him this fall!

RT: Is there anything else you’d like to add?

Cathy: Well, it has been a pleasure to reconnect with you. I always appreciate the opportunity to talk about kids and music,

RT: It’s been great catching up with you, too. Thanks for stopping by.