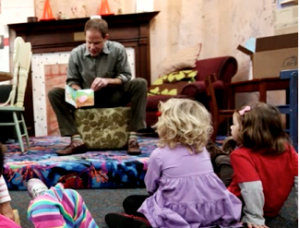 Welcome to part 2 of our interview with John Hutton, MD, affectionately known as the Book Doctor. In addition to practicing pediatrics in clinics for under-served patients, John is also an independent bookstore owner, speaker on child development, dad, and author of the award-winning book series Baby Unplugged.

Earlier this spring, John and I started chatting about books and children’s literacy with the goal of putting together an interview … we had such a great time collaborating that we ended up with three!

In Part 1, John shared his thoughts and the science behind the mantra “screen free until three”  and its role in child development. Today, we’re going to talk about Literacy 2.0 (e.g., e-media, iPad, Leapster, et al) and the secrets of the box. Intrigued? Well, read on!

Terry: Before we go to much further, I wanted to ask you about a phrase that you used in one of our conversations. You said that “kids are growing up in Tupperware containers.” Could you explain what you mean by that?

John: Sure. I’m sure your readers will recognize this concept. More and more, our kids have nature fed to them via Dora and Diego, Disney, or other shows.  Thus, they are fed a steady diet of rainforest and tigers, but can’t identify an oak leaf.  There is a Baby Loves Nature App, as well as videos to teach Baby Geniuses about water, the sky, wind, and adventure. Why outsource it?

Children are young scientists and naturalists. They are also mammals, and need a sense of connection, a “sense of wonder” as Rachel Carson famously put it.  This often starts in your own backyard.  Again, going outside is fun and doesn’t need to be an overt educational exercise, though it is – naturally.  Interestingly, there is also evidence that the rise in allergies and autoimmune diseases is a byproduct of growing up too clean (the “hygiene hypothesis”) – getting dirty is good for you!

Terry: Continuing with that thought for a moment, watching my own daughter – and sometimes playing screen activities with her (like Wii Sports) – there are some pretty amazing moments. I guess I’m going back to the idea “are all screens created equal.”

John: Childhood only happens once. Exploring in a way that is meaningful to THAT child only lasts so long. This is their only opportunity to do wonderful, robust things like turn pages, play with boxes, bounce balls, snuggle up with blankets, and explore the yard.  You’ll find these kids are healthy, more active and focused, sleep better, and are more confident and secure.  The foundation we, as parents, always want to give them. So why outsource child development and let someone else do it less effectively than you can?

Once introduced into the increasingly wired world, the genie is out of the bottle, so to speak. I have two teenage girls who are enamored with cell phones. This is a much tougher issue and has been a bit of a challenge for us. Our major intervention there is to keep them, along with laptops, etc, out of their bedrooms, which is great since we see them more often and they actually read and sleep in there.

I guess the short answer is: all screens for older kids are not created equal. If I could wave a wand, there would be an e-media driver’s license, and children at least 8 years old and/or fully independent readers would be eligible. There is a valid, family reason my teens have cell phones. That said, we still set boundaries for where they live and how they can be used.

RT:  What about digital books and apps for kids?
John: There is a maxim in pediatrics: children are not small adults. Their needs, abilities, and susceptibility to illness change at different ages. One size does not fit all.  The same holds for e-readers and apps.

For grownups and young adults, they are here to stay, and how a given person uses and assimilates them is a function of taste and temperament.  For younger children, I am not a fan, especially-especially-especially for under threes.  Have I mentioned that if I were empowered I would create a e-media driver’s license?

Basically, I see digital books and apps for young children as part TV equivalent, part “gateway drug.”  Same e-media, just a new package … It doesn’t mitigate the negative impact child development.  For example, many popular movies (e.g. Kung Fu Panda, Toy Story) are packaged as e-books, with words that light up as a story is narrated overlaying a cartoon.

All of the standard educational claims are there: “Build vocabulary!…Learn with Woody!…Make reading fun!”  The breakdown is on these levels:

Beyond their value of motor skills and comprehension, there is an intimacy of real books. Focusing on a single story with a loving caregiver is not only magical, it is incredibly robust in terms of fostering deeper analysis of the story, focus, and completion. The real world is important!

So even the 8-year-old who can read on their own can – and should – be sharing reading time with Mom and Dad, away from the e-Reader, iPad, etc.

Terry: Picking up on your “cartoon” reference for a moment …  In the sidebar of the Bookstore’s website, you have include this item as a way of explaining how blue manatee is designed with kids in mind: “Cartoon” is not a synonym for “good children’s book.” Could you elaborate?

John: blue manatee has a tradition of only carrying books that started as books. If it was a movie or TV show first, we don’t want it.  We reject the notion that “content” works in all platforms. A book is not just “content.”  A book should stand on its own, by virtue of cohesive plot, characters, and illustration.  Books based on cartoons (e.g. Sponge Bob, Dora, Elmo) are generally poorly written by unnamed mystery author teams, and mostly serve to sell tie-in products and promote TV channels or movies.

That said, parents and children often seek these books out and wonder why we don’t carry them. For the most part, though, they are grateful that we don’t.

Terry: I knew we were kindred spirits … we have the same rule for books we accept in the reading tub: no branded content or other-media tie-ins. Now to the moment everyone has been waiting for. The Box! As I mentioned in our initial conversation, when I opened the blue manatee box that brought Baby Unplugged to my house, I laughed out loud! So tell us … what’s so important about a box.

At the bookstore, we get lots of requests to ship “book baskets” to friends and family in other parts of the country. Long story short, there is a lot of wasted packaging that goes into that process, so we were looking for something a little greener. Then it hit me: kids are the world’s best recyclers!

So now, instead of cellophane, in each box you will find a User’s Guide to boxy play organized by developmental stage,  a small sponge, and a chunky crayon. The gift enclosures feature a personal message and one from a menu of original illustrations made for us by notable children’s author/illustrators, including Loren Long, Lois Ehlert, and David A. Carter. We even have a poem by Jane Yolen showcasing how one might transform a cardboard box.

Our packing noodles are edible – though not tasty – and that moist sponge is enough to make them stick together.

The rest is up to the child.  From a developmental perspective (I am a pediatrician, prone to these kinds of thoughts), such open-ended, creative play is incredibly robust and healthy.  It – like reading books – is a very effective way to unite grown-ups, children, and imagination, which is exactly what children need. 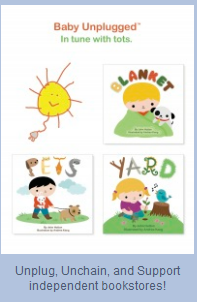 They are so iconic –  not to mention important for creative learning – that one of the upcoming titles in the Baby Unplugged series is “Box.”

Boxes are one of the most inexpensive yet robust learning tools/toys yet devised.  When your child opens a gift – any gift – what is the thing they want to play with most?

Part art, part architecture, part science, boxes have enchanted children for decades, yet are now too often thrown away in favor of the Leapster inside. A box is totally custom and can’t be Amazoned or require an iPad app!  How cool is THAT?

If you missed one of the earlier chats, here is the full list.

You can also catch up with John and learn more about blue manatee bookstore and decafe here.

One response to “Child Development Part 2: An Interview with John Hutton, MD,”