Let’s get this out of the way first: I met Valerie Paterson about nine years ago when our respective employers sent us to a training class. We hit it off and spent time outside class socializing (and running – yuck). I knew she wanted to be a children’s book author. When I left my office career to become Mom, we lost touch. We recently reconnected through the DC-Kidlit group.  When I heard about The Other Side of Blue, I asked Valerie to send it to me.  I explained – as I always do – that we don’t guarantee a review. [photo credit: Anne Lord] 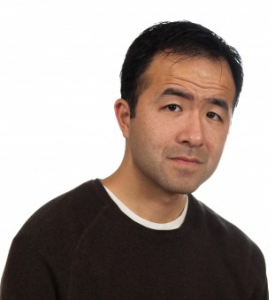 As you may recall, in March I reviewed Cheryl Rainfield’s book Scars.  Her publicist saw my review and asked if I would read Crossing by Andrew Xia Fukuda.  So she sent me an advance review copy for consideration, with the understanding that there was no guaranteed review. [photo credit: Justin Ong]

Now. Let’s talk books! I am really excited about these two novels. They are classified as young adult, but I would call them crossover books. The writing is crisp: the vocabulary is descriptive without being flowery. “Surgical precision” keeps coming to mind. Both stories grab you in the first three pages, and the narrators are clever teens – smart enough to match wits with adults!

What I love about both of these books is how the authors allow the main characters  to tell their stories. Cyan (The Other Side of Blue) and Xing (pronounced “shing”) (Crossing) live in worlds that are completely different, and have personal stories that go in different directions, yet they have a lot in common. Both are very quiet, astute observers of their worlds.

They define their lives by their relationship to their father.

It was just a year ago that Cyan’s father died in a mysterious boating accident in the ocean off the coast of Curacao. Now it is summer again, and Cyan and her artist mother have returned to the island. It is not like it was before, and there are still so many unanswered questions, starting with “what happened to my father.” Cyan’s mother is far more attached to her alcohol than her daughter … and she’s invited Kammi, Cyan’s probable step-sister-to-be to join them.

Seven years ago, Xing and his parents emigrated from China, arriving in the United States. When Xing was a young boy in China, he was often asked to sing. Because of his beautiful voice, his father wanted Xing to have the chance to develop his gift in America. Xing, who wants to be called “Kris” to get people to stop butchering his name,  has been cast as the lead in his school’s production of The Man of Jerusalem. But his father would never hear his voice again. One day several years ago, when Kris and his dad were walking home from the train station, a pickup truck driving too fast killed his father, then sped away. No one paid for the crime – except Xing and his mother. Kris wanted nothing more than to return to China; his mother said they were staying in America and quietly blaming him for what happened.

Neither character had a particularly strong relationship with their mothers, but now their “buffers” are gone and the relationships are further fractured and nonexistent. Cyan is passive-aggressive in getting her message across; she sneaks into her mother’s studio to steal a tube of paint. Kris’s life is completely detached from his mother’s. He is gone to school before she gets up, and she is off to work before he is home from school.

They don’t run with the popular crowd.

Both Kris and Cyan both like to keep to themselves. Like teens everywhere, they are painfully aware of and constantly assessing their self image. Their peers and the adults around them worry about how they have withdrawn from the world, and both are happy with that.

There is only one other Chinese family in Ashland, New York. The Lees own and operate the Chinese restaurant at the mall’s food court. They arrived in the United States two years after the Xu’s, and Xing helped Naomi adjust to life in America. Now, she was completely acclimated. For years the two were inseparable friends, now in high school, they were drifting apart. From Xing …

[I am] the Chinese kid who lived in an all-white town, attended an all-white high school, the shy outsider, aloof and inscrutable … In the mirror I saw blandness, the kind of face passed over in a crowd, the plainness of features that could drive a caricaturist out of business. My blah face, tight nose, earthworm lips, thin eyes (yes, OK, they were squinty shut up already) – an impenetrable mask to all around … [Naomi’s] English was Julie Chen perfect; mine was Jackie Chan cumbersome.

Like Xing, Cyan has few friends, and none with her in Curacao. Her best friend Zoe is home in New Jersey, and she has no interest in making a new friend in Kammi. Mayur, the neighbor’s son, is “a jerk,” and someone she doesn’t like to be around.  She is much happier combing the beach for sea glass and creating her jewelry. From Cyan …

“[Kammi’s] face appears fair and freckled across the nose, but she has brown hair, not blond like me. She’s thin, too, not fat. I studied every detail … I packed two broomstick skirts, five T-shirts, enough underwear for a week, and a bathing suit with a ruffle at the bottom that Mother made me buy the week before we left. She said it would be flattering. She didn’t say the ruffle would hide the roll of fat around my waist, the one I see her look away from whenever I lean over … I feel my bathing suit sticking to my skin underneath the same skirt and T-Shirt I’ve been wearing all day. If I go into the pool, I’ll take the skirt off and leave on the tee. It skims the top of my thighs and helps cover my chest better than the swimsuit. As long as I don’t get wet, the tee hides the fat.”

While Cyan knows she isn’t the cute, cheerleader type and has her share of teen angst, most readers will see her as a typical teen. Xing, however, casts himself as an outcast, and at the same time is defiant about that label. He is proud of the fact that he is nearly invisible to those around him, and yet he is angry that his talents are unrecognized. His sense of self is morphing beyond typical.

The impact of the loss of their fathers is evident for both Cyan and Xing. It is how they deal with the loss where the stories go their separate ways. On the jacket flaps, both are characterized as “mysteries,” but they are very, very different.

Cyan’s is a personal mystery. She is looking for the clues that will bring closure to the emptiness she feels since losing her father. The ever-annoying Mayur taunts her by saying he has information about the accident that isn’t in the police reports. She is driven to find out what that is, and is careful not to push Mayur too far. She would give anything to know why her father went out alone in the boat that day and what really happened to him. Her father’s death – and the deteriorating relationship with her mother – is a singular event. It is heartbreaking, it has changed her life, but she still finds beauty in the world around her. The mystery of what happened is really secondary to the story.

When some presumable white guy hit and killed his father,  it was just another of the reasons why life sucked. In different ways, Xing catalogs all of the events – indignities if you will – that he has suffered since the day they boarded that box in the ocean that brought them to America. “At the very second God created me, He must have blinked. And ever since, He’s been blinking a lot.”

In Crossing, death is far more than a personal tragedy. Through Kris’s narrative, we learn that over the last three months five high school students have been attacked. Four went missing and were ultimately found dead on school grounds. The only common denominator is that some of the victims, shortly before their deaths, claim being followed by someone in a red jacket. Even Kris recounts being followed by someone in a red jacket. Xing’s personal losses are part of the plot, but finding the killer is what keeps you reading.

Where girls will more likely be drawn to The Other Side of Blue, Crossing will appeal to all audiences. When you close the book, you wonder what is going to happen next for Cyan and Xing. Crossing is the darker of the two books. For Cyan, you have a sense of hope. For Xing/Kris, my feelings are (still) hard to pin down. When I finished reading Crossing, I immediately went back to the front and started skimming for clues. The ending is a surprise, though the more people keep saying that, the less likely it will stay that way.

Both of these books are wonderful to read independently or in a group setting. Crossing, in particular, would be an incredible read-aloud in a classroom session. The Other Side of Blue would be great for a mother-daughter book club when you’re ready to talk about sexuality (not explicit, but the awkwardness of being a teen and setting limits). For readers’ groups who want to really explore race, bullying, diversity, acceptance, and isolation, Crossing would be my first choice.

My one beef with Crossing is the continual reference to Seung-Hui Cho, the Virginia Tech student who killed 32 people in April 2007. The event is cited periodically throughout the book. Sometimes the reference came from Xing, sometimes from his ignorant schoolmates who equated Chinese and South Korean as “the same thing.” Maybe it’s because I live in Charlottesville, VA, and Tech is almost as big a part of our community as UVA. Maybe because I think this is a timeless story and the references freeze it in time. Maybe it is because I was empathetic to Xing and thought the label was unfair. I also think that the references will also keep some people from reading it, and I hate when that happens to a really great story. Maybe it is all of the above. If Fukuda’s goal is to anger the reader to get us to see Xing’s frustration, then he succeeded.

This book talk is my May contribution to the People of Color reading challenge. Looking at the world through Xing’s eyes is not only informative but is down-right frightening. I kept wondering how, in the 21st century, we continue to treat each other like this.

NOTE: Bookcover images link to Amazon.com, with whom the Reading Tub has an affiliate relationship. The Reading Tub may earn money by purchases made through those links. You are not obligated to buy the books nor to use those links.

4 responses to “Book Talk: Crossing by Andrew Xia Fukuda and The Other Side of Blue by Valerie O. Patterson”