Earlier this week, the world learned that Donald J. Sobol had passed away. Mr. Sobol is known most notably for his Two-Minute Mysteries, started and in syndication since 1959, and Encyclopedia Brown book series, which began in 1963. He also wrote a novel, several nonfiction books, and articles for literary magazines using a pen name. In all, he wrote 65 books. In 1976, the Mystery Writers of America honored Donald J. Sobol and his Encyclopedia Brown book series with a special Edgar Award. 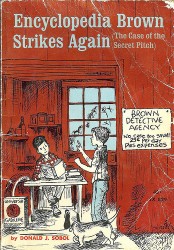 I doubt there is a reader among us who hasn’t spent some time with Leroy “Encyclopedia” Brown, Sally Kimball, and, of course, Bugs Meany and his Tigers.

Did I like to read before I met Leroy, his friends, and enemies? Yes, but thanks to those fast-paced, short stories I became a book addict. I was hooked by the idea that I might be able to outsmart the main character, and that even if I didn’t figure out the mystery right away, I had a plan b: the answers in the back.

The model for the Encyclopedia Brown book series is universal and timeless. The books I read in the early 1970s are now reprinted with publication dates in the 1990s and 2000s. The books have never been out of print and you can read them in 12 languages!

The stories people share in their Amazon reviews remind us how stories like these can and are hooking today’s kids on reading. Hawkeye Collins and Amy Brown and Einstein Anderson, Science Sleuth, are direct descendants in the crack-the-case-yourself book series genre. Readers can also tag along with Nancy Drew, Cam Jansen;  Henry, Jessie, Violet, and Benny Alden (aka The Boxcar Children); Jigsaw Jones, and many other peer problem solvers. 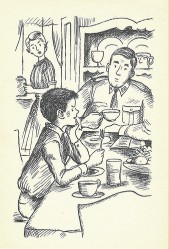 Is Encyclopedia Brown “the” right book for every young reader? Maybe not. Still, they offer a model of reading that is well suited to a child’s curiosity and desire to “know all the answers.” Here are a few other clues from the series that can help you in finding that perfect book  …

To keep generations of readers guessing for nearly 50 years (and going) is quite a remarkable achievement. To have inspired so many authors to write for children – many with equally successful book series – is truly amazing.

Readers, who inspired you?

2 responses to “Encyclopedia Brown Inspires Readers – No Mystery There”