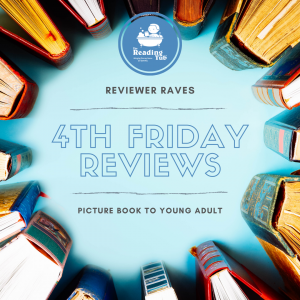 I hope that this edition of Fourth Fridays finds you safe and healthy. Each of us is dealing with the pandemic as best we can, and I hope that there are opportunities for you to find a shining moment or two in each day.

One of the shining moments (to me) has been the opportunity to slow down and read. Admittedly, it is pretty hard to concentrate, but escaping into a story at home, listening to an author read from their book, or taking a class with a children’s book illustrator have given us the chance to access the world and yet slow down, too.

We’ll have more on this next week, but today we want to share five of our new favorite books. Yes, we read more than five books this month, but these are the titles that we – teen and parent reviewers – met our criteria:

Worth noting: The books on our Fourth Friday list may not be new books by publication date, but they are new to the reader. If a reader discovers a book they love, then it doesn’t matter if it was published “a long time ago.” 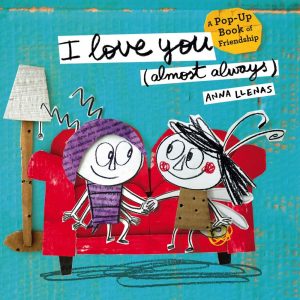 I Love You (Almost Always): A Pop-Up Book of Friendship
by Anna Llenas
Sterling Childrens Books, 2020

Review Tagline: You will love Ralph and Rita, too!

Ralph is a roly-poly bug. Rita is a firefly. Their differences are why they like being friends. Then one day, those differences turn into annoyances. Rita says Ralph is bossy, and she doesn’t like it when he curls into his hard shell and rolls away. Ralph thinks Rita’s light is too bright, and she flies too fast. Now they are unhappy. They still want to be friends, so Ralph tries to soften his shell, and Rita tries to fly a little slower. Ralph and Rita are different, but they still love each other.

Review Excerpt: Ralph and Rita are adorable insects that kids will befriend right away! The two have a relationship where kids can see themselves, and the story creates opportunity for great discussions about what makes a friend, as well as empathy. The variety of interactive elements is excellent. Even though there is an activity on every spread, but it doesn’t get in the way of the story. This is a book you’ll read over and over and over again. 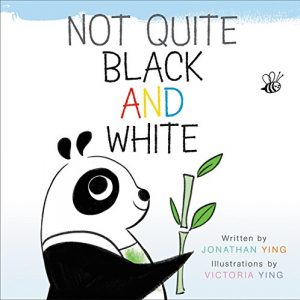 Not Quite Black and White
by Jonathan Ying, illustrated by Victoria Ying
HarperCollins Publishers, 2016

Review Tagline: Colorful and Fun with a Great Message

Yes, zebras, penguins, pandas, cows, and dalmatians are black and white … but not quite. You see, the zebra likes pink polka dots and the dalmatian wears a red cape. From primary colors to pastel shades, kids learn colors.

Review Excerpt: An adorable, fun rhyming poem. Kids will recognize some (but not all) animals. Love the subtleties and contrasts of the color palette: purple and lavender; red, pink, and maroon; and green and aqua. I’d buy this as a toddler gift, but there are subtleties that will grow with your child through first grade. 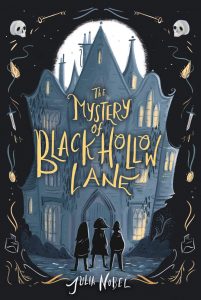 For eight years, the only family Emmy Willick (11) has known is her mother. Her father disappeared, and even now, all these years later, her mom won’t talk about him or what happened. Because of all the travel for her new TV show, Emmy’s mom decides that the best place for Emmy is Wellsworth Academy, a boarding school in London. The only connection to family Emmy takes with her is a recently discovered box of medallions that her father had hidden in the attic.

Book 1: With the help of her friends Jack and Lola, Emmy learns to navigate the written – and unwritten – rules of Wellsworth. Along the way, Emmy discovers that her father had attended the school, too. He belonged to the Order of Black Hollow Lane, a secret society, and stole those medallions! He has been living in hiding to protect her; but now that she has the medallions, things have changed. Members of the Order are determined to recover them AND find her father. Emmy takes action that the hopes will protect her father and get the Order to leave them alone.

Book 2: Emmy was wrong. Now that some of the medallions are gone, the Order is raising the stakes. To force Emmy to tell them where her father is, they have framed Lola for a serious crime AND paid people at the new school to beat her up. Desperate for this to end once and for all, Jack, Lola, and Emmy devise a plan to beat the order at its own game. It could work, or someone could get seriously hurt. Is it worth it?

Review Excerpt: Mystery adventures are classics, and this is an exciting, fresh story. The kids are definitely trying to solve a mystery, but you don’t get the feel that this is a detective novel (a la Nancy Drew). Mystery lovers won’t be the only readers who can’t put down this book! Well-paced action and a few plot twists will keep kids reading. Family and friendship dynamics add some realism (for those of us who didn’t go to boarding school) and will connect them to the characters.

Note: The links below go to Book 1. 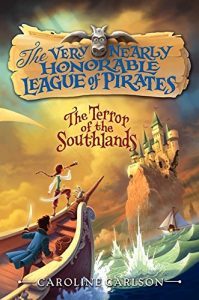 The Terror of the Southlands
The Very Nearly  Honorable League of Pirates, Book 2
by Caroline Carlson
HarperCollins Publishers, 2014

Review tagline: Set sail with the Terror of the Southlands. You won’t regret it!

With her evil father in the Dungeons and Pirate Captain Jasper Fletcher returning magic items to the citizens, life is becoming pretty routine. Pirate Hilary Westfield (aka Terror of the Southlands) is getting antsy for an adventure. When Captain Blacktooth invites her to his ship for a meeting, Hilary is certain he has a medal for her. Instead, Blacktooth cites her for “unpiratical behavior,” in violation of the Code of Conduct of the Very Nearly Honorable League of Pirates (VNHLP). To return to being a member in good standing, Hilary must choose between one of two quests.

Before Hilary can decide her quest, Miss Eugenia Pimm, the Enchantress who controls magic for all of August territory, needs help. Urgently. By the time Hilary and her First Mate Charlie make the trip to Miss Pimm’s Finishing School for Delicate Ladies, Miss Pimm is missing! Finding Miss Pimm is not the quest Captain Blacktooth suggested, but it is important and the Terror of the Southlands and her crew are going to solve the case. Avast! It’s not that easy.

Review Excerpt: Fun and fast-moving to read. Unlike other stories, Magic is something that all citizens can possess and use to their benefit. That’s a nice twist. Hilary is a pirate with a heart of gold and a moral compass that points true North. The cast around her is strong, and that includes the evil Mutineers. The adventure unfolds in a way that gives readers an aha moment: a villain can be a pirate, but not all pirates are villains. Letters, invitations, and inspector reports complement – and create effective pauses in – the main narrative. Vivid language adds to the imagery and is sure to have readers giggling aloud.

Highly recommended for those who love pirates, adventure, and strong, positive characters. This is an exceptional choice as a bedtime story or classroom read-aloud. Yes, boys will like this, too! 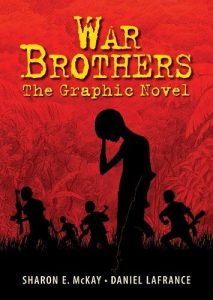 In the 1980s, Joseph Kony’s Lord’s Resistance Army (LRA) had abducted tens of thousands of children to be used as soldiers and slaves. This is the story of five children captured and enslaved by Kony’s LRA circa 2002. Jacob (14) and his friends Norman, Paul, and Tony, and a boy named Oteki are kidnapped as they return to their seminary school. They pray to be rescued from the violence and suffering at the hands of the ruthless LRA soldiers. Nightmares and horrors await them at every turn as the children struggle to survive on their own in this costly war. They have no one to rely on but themselves to find a way out of Kony’s army alive. Although it is a fictional work, it is grounded in history and includes lots of factual content.

Review Excerpt: I’m 17 and I don’t usually read graphic novels, but War Brothers was a pleasant surprise. The raw emotion and suffering I saw took me on an emotional roller coaster as I learned about the realities of this war. McKay’s writing creates a story of great depth and meaning by exploring faith and tragedy through the lenses of war. LaFrance’s artwork is astounding and perfectly captures the intense emotion in every panel. The use of graphic weight is incredibly effective, as it clearly distinguishes the children’s time with the LRA from their time away from Kony’s army.

This is an excellent read. People interested in African history, character-driven stories, and realistic fiction will find this an engaging, eye-opening read.

Worth noting: This is an intense, visual depiction of the war in Northern Uganda. Some readers may find the violence and suffering too much to handle. While it is not graphic, some readers could find it very frightening.