Independence Day – the 4th of July – is our NATIONAL day. In between declaring our independence and becoming the United States of America, there was a war. But on the other side of that war came a Constitution and Bill of Rights that delineated freedoms for Americans. The first is the Freedom of Speech. It is these freedoms that make Independence Day so important.

The Freedom of Speech came back to me this past week when the Reading Tub’s purpose and integrity were questioned in not one, but three emails received within a matter of 10 minutes.

First we received this question …

That is the complete message. Over the years we have gotten so many of these questions and have had volunteers do the research only to find out that it was a student asking us to help them with a class project. Without any further identifying information, we thought “state.edu,” not to mention the timing (summer school) was a tip-off.

Well, when we replied that as a student, it seemed the requester was asking us to do the work, we got this in reply … actually three replies within a span of five minutes. 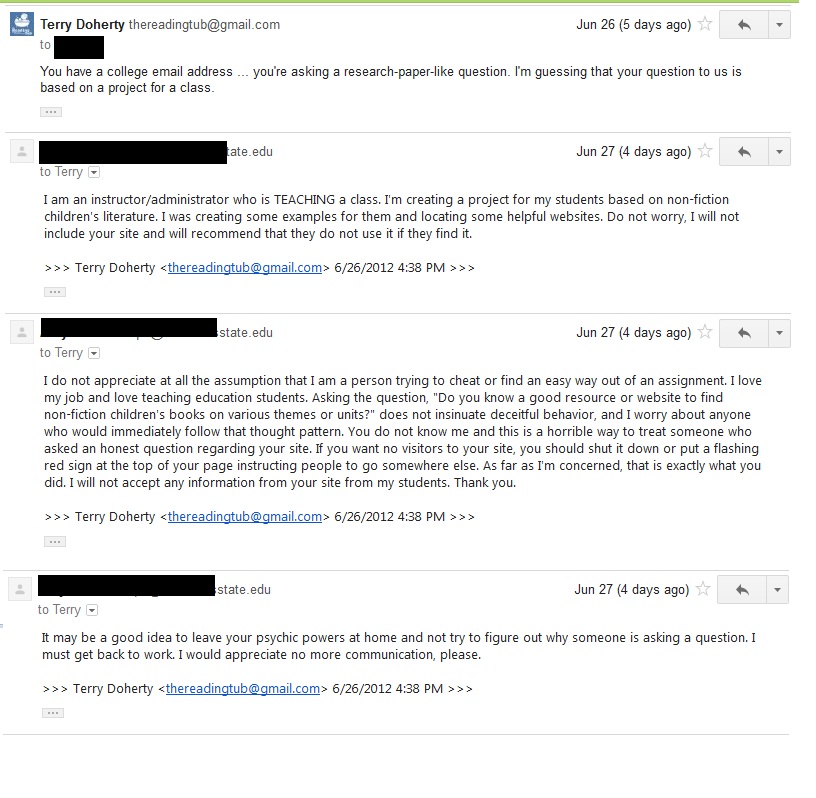 Did we make a mistake? Yes. Based on the lack of identifying information, we concluded this was a student, not a teacher. I cannot name an inquiry where a teacher or librarian did not identify themselves. Had we asked for the information that was subsequently provided by the requester, we would have approached the question differently.

Was our mistake commensurate with the venom? I don’t think so, though I am admittedly biased.

Did the requester have the right to say what s/he wanted? Absolutely. We are very privileged to speak our mind in the United States whenever, wherever, and however we wish. As we observe other world communities we need to be thankful. Very thankful!

Happy Independence Day! We wish you a 4th of July filled with remembrance, celebration, and the free expression of what’s in your heart!