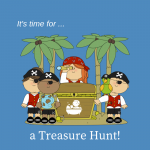 Do you remember going on scavenger hunts and treasure hunts when you were a kid? Weren’t they just the best?

Until I started creating treasure hunts for my daughter at Easter, I never even considered their hidden literacy value. Ahoy! There is treasure aplenty.

Although they are often used as synonyms, treasure hunts differ from scavenger hunts in that they include clues that ultimately lead to a prize of some sort. A scavenger hunt – which is MUCH easier to create – begins with a list of items and often has a time limit. Whether it is a simple checklist with specific items or a clue-based outing that sends them from one place to the next, your hunters are using their literacy skills!

Creating a hunt can be simple or elaborate. Not feeling creative? Then let the sources at the end of the post spark an idea. With a little luck, you’ll launch a hunt or two, then the kids will take over and create their own, adding in their own ideas and rules.

All of the things you need for an awesome scavenger hunt you already have:

Prizes can be simple treats like allowing the winner(s) get to eat dessert before dinner, or maybe they win a date night with Mom or Dad to go to the movie/activity of their choice.

Get other Treasure Hunt ideas in our Road Trip series (Part 3).