We’ve come to the last in our series of great reads for going back to school that aren’t really about school. This is a collection of coming-of-age stories for teens and young adults. As in our previous list, most of the stories aren’t about going (back) to school. Where there are scenes in high school, it is nothing more than a place where the rest of life’s events are shared or processed.

Do check out the books on our Middle Grade Fiction list, too. The events are realistic and the stories are sophisticated enough to be enjoyed by high school students, too.

List includes affiliate links to Amazon.com, where a portion of your purchases can be donated to theReadingTub.org. 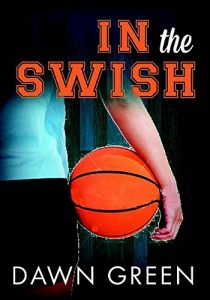 In the Swish
by Dawn Green

Bennett Ryan, a star basketball player, is forced to move when her widowed mother takes a new job as a principal. The new school is not only several hours away from her old school and team, but it is also the school of her former rivals. Bennett struggles to adapt to her new school and gain acceptance with teammates who consider her a rival. In the process, Bennett makes a surprising connection with Matti, a girl on the Autism Spectrum who is also the daughter of her new coach.

The messages of resilience, tenacity, and positivism really resonated with me. The characters are relatable and endearing. Bennett was a great role model with lots of admirable qualities. The story creates opportunities to talk about empathy, compassion, and being able to step back from yourself with honesty. Of Note: Our teen reviewer loved that there is no romantic interest in the story. 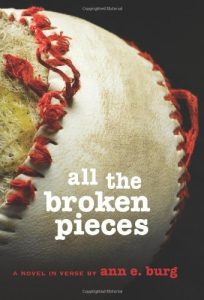 All the Broken Pieces: A Novel in Verse
by Ann E. Berg

Matt Pin was only 10 when his life took a drastic turn. His father, an American soldier, abandoned him and his mother in Vietnam. Matt’s Vietnamese mother begged other America soldiers to take her son. Matt was taken away from his family and everything he knew. Now he lives with his caring adoptive family in America, but he has trouble adjusting to his new life and fitting in. Matt’s past is haunting him and will not leave him alone. Yet he is unable to open up and tell anyone about Vietnam. As Matt gets older and begins to connect with other people, he’s able to tell his story for the very first time.

This is an historical fiction book. Teen reviewer: “The use of verse is a unique way of getting Matt’s story across and it really helped reinforce the message. There were moments in the story where I felt really touched by Matt’s sense of honesty and perseverance. I could connect with Matt often, as he worked through feeling alone and unable to share a burden.” 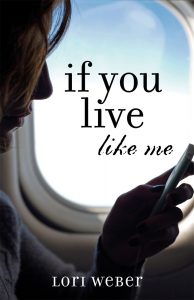 Three years, three moves. Cheryl wants to go home. Not the new, rented home in Newfoundland. Home home: to Montreal. She’s an outsider … life is easier that way. When she explains she’s just here because her dad is writing a book about Newfoundland’s dying way of life, conversation ends. No one wants to talk. Well, except Jim, the boy next door. For reasons that Cheryl can’t understand, she has found someone she wants to talk to. But when Jim finds out about the book, Cheryl finds her “wall” in a shambles and a friendship crumbling around her. Is running to Montreal the answer?

Everyone, not just teens, who have moved a lot, can relate to Cheryl’s feelings of ambivalence, frustration, isolation, and needing to belong. The characters you think are perfect have flaws, and the “bad guys” aren’t as flawed as you think. This is a book readers will come back to, especially when they are frustrated by being in a new place or by their parents. 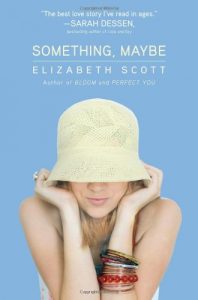 Something, Maybe
by Elizabeth Scott

Teens, especially those in high school, will definitely relate to Hannah’s life and her struggles with school, parents, a job, and relationships. Teen reviewer: “I really appreciate it when authors write book about real issues that kids face. I wouldn’t mind owning Something, Maybe. I could read it many times without getting bored.”

The one thing Darius and Twig can count on is each other. Growing up in Harlem isn’t easy when you’re trying to steer clear of bullies and gangs and anyone else who seems bent on crushing their dreams. Twig is a middle distance runner catching the eye of coaches and agents. Running is his ticket out, but there’s a smarmy side to racing that leaves him worried. Darius is a writer who is *this close* to getting published. He has hopes, but big doubts, too. Together, they are invincible. High school is almost finished, and their dreams lie ahead. They won’t be together anymore … what’s next for their friendship?

Darius & Twig is a pick-me-up story that will resonate with teens. Exceptional writing and spot-on characters will have even the most dormant reader wanting to hang out on the stoop a little longer.

Haven is too tall. At fifteen, she is nearly six feet. That’s not the only awkward thing. She’s dealing with her parents’ divorce. Her father’s recent marriage has left her mom despondent and added more drama to her sister’s upcoming wedding. Enter Sumner Lee, her sister’s charismatic ex-boyfriend who is less love interest and more of a reminder of a time when life was simpler. Is it ever possible to go back? And do we really want to?

Through Haven, we learn vital lessons about the perils of growing up and moving on from the past. Our teen reviewer notes that there is no closure, a dramatic finale, big discoveries, or insights into the universe. “It is raw and speaks truthfully to the highs and lows of life. Haven is simply existing and growing. The book ends positively, leaving the reader with the knowledge that wherever she is destined to be, Haven will eventually get there.”