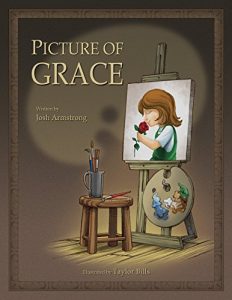 One of the great joys of being Executive Director of The Reading Tub is not just discovering wonderful books, but also have the chance to chat with authors about their stories. More often than not, an author’s life experiences are woven into some aspect of the book, but for every author, it’s a different “fabric.”

A few months ago, I met a debut author with a wonderful story. Josh’s new book Picture of Grace is a beautiful, touching story about a little girl and her grandfather. But Josh has been writing for years. The newspaper articles written for the local paper are definitely for a different audience, and yet they had the same, sweet “voice” that carries you through Grace’s story. [Tell me you don’t love this letter to his wife Chelsea on the eve of their wedding.]

I am excited to introduce you to debut picture book author Josh Armstrong.

Terry: Although the title would suggest that this is Grace’s story, it is Grandpa Walt’s story, too. Was it difficult to balance their roles as co-stars and not let one take over the other?

Josh: Not really, because I think they complement each other. Their conversations reveal equal information about each character, from Grace’s questions to Grandpa Walt’s answers. Plus, their personalities are similar — since they’re related, you can see glimpses of one character’s personality in the other character. I imagine Walt as a boy was a lot like Grace, in that regard.

Terry: What I loved best about the story was how Grandpa Walt modeled the idea that you need to be “your best self.” Grace loses Grandpa Walt in the story, so do you worry that this theme is lost by readers who are looking for a “grief book for kids”?

Josh: I’d like to think that Picture of Grace has positive messages about being true to oneself and dealing with grief.

For instance, while Grandpa Walt is gone, a part of him still lives with Grace as she remembers his advice to her. Plus, without spoiling the ending, we know his advice ultimately leads to her doing something that brings her comfort — something she finds therapeutic — though she may not completely understand it at the time.

But yeah, I’d say the main message of the book is that we must be true to ourselves despite our critics.

Terry: In several of the illustrations, Grace is watching Grandpa Walt paint. He leaves behind an unfinished painting, and at the end of the story, the reader is left with the question of whether or not Susan sold the painting to Delilah Kain. What do you think happened?

Josh: I doubt Delilah wanted the painting at the end, considering what happened to it, but I also imagine the decision wasn’t easy for her. Delilah knows Walt was talented. So, I think she greatly considered purchasing the final painting. But what Grace did — that really upset her. Speaking of Delilah … she is quite a contrast from the other characters in the book. Did you find her hard to “like”?

Josh: Some folks think Delilah is over the top; but honestly – without naming names, of course – I can think of plenty of Delilah’s I’ve encountered over the years.

Everyone is three dimensional, but there are people like Delilah who choose to show only one side of themselves to most people. Sometimes people can be rude or mean to us, and we may not know why – the reason may have nothing to do with us. 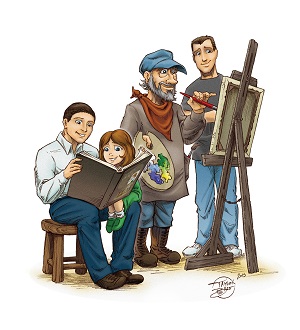 In our interview over on the Reading Tub website we talk more in depth about the various aspects of the book, so I’m going to stick with talking about the art here. Taylor Bills’ illustrations are exquisite.

They are poignant but not dark, and, like this illustration of Grandpa Walt, Grace, you and Taylor, very sweet. When you started your collaboration, did you already *know* what Grace looked like? Were there specific character descriptions that you gave Taylor?

Josh: First of all, thanks for the kind words about Taylor’s illustrations. I’m thrilled that he agreed to illustrate Picture of Grace. When we began this collaboration, I had an idea of what I wanted Grace to look like, but I tried to hold back when describing her to Taylor because I wanted to see what he envisioned. I was happy to see our initial ideas of the character’s design were very similar.

Terry: What was your reaction when you saw the first sketches?

Josh: It was the first time I thought, “My gosh, this is really happening!” Seeing those sketches made the project seem more real than when it was just a Word document on my computer.

Terry: One of my all-time favorite questions focuses on connecting characters across books. If you could introduce Grace to another beloved book character, who would that be? and why?

Josh: Hmm…I’d like to see a collaboration between Grace and Harold of Harold and the Purple Crayon.

Since they both love the artwork, I think they could learn a lot from each other. Perhaps Grace could share illustration tips she learned from Grandpa Walt, and Harold could demonstrate how to draw using one’s imagination.

Terry: That would be a great collaboration. The first person who came to my mind was Noonie Norton, of Noonie’s Masterpiece. The girls share some similarities in dealing with loss, but also have strong spirits, too.

I’ve really enjoyed exploring Grace’s story and look forward to reading more of your children’s books in the future!

KidLit Lovers – To read more of our interview with Josh Armstrong and learn about his reading interests, head over to The Reading Tub for the rest of the story.