Your TBR is gonna topple. You've been warned.


Pinky Kumar's fondest memories of summer are the times she spent at her parents' lake house on Cape Cod lake house. Her mom uses the extra time together to lecture Pinky about her string of bad choices (and bad boyfriends). It wasn't her fault she considered herself to be a free-spirit. Her mother doesn't understand her passion for social justice. To prove to her stuck-up mother that there's more to her than meets the eye, Pinky announces that she has a new boyfriend: a "good" boy. Except when she said it, she didn't actually have a boyfriend.

Enter Harvard-bound Mama's boy Samir Jha. When his law internship falls through, Pinky sees it as the perfect opportunity to enlist him as her perfect boyfriend for the summer. Despite their frenemy status, Pinky invites him to be her fake boyfriend for the summer. Since he doesn't want to go home as a failure, he accepts. It is fake, after all. As the two spend more time togethery they realize that there may have feelings for each other. For one, Pinky thinks about him all the time. And Samir discovers that the thing he hates most about her - her infectious, care-free attitude - may just bring them together.

Teen Student Reviewer (15):
Like with all of Sandhya Menon's books, I absolutely love this latest novel. After reading There's Something About Sweetie, I had already predicted that there might be something blossoming between Samir and Pinky. Their turbulent and volatile relationship was heartwarming and exciting to see.

Many teenage readers, such as myself, are huge fans of both the fake-dating and enemies-to-lovers tropes. This novel has both, and it was handled near-perfect. Samir and Pinky's fake-dating business encompassed both of their wants and needs, including having both characters fall for each other by the end. Their transitions from enemies to friends to lovers was handled consistently with their explosive relationship, and left readers satisfied. Couple that with the fact that the novel uses Indian characters, and it is something just different enough to be its own amazing novel.

However, a couple of things were unrealistic. First, Samir and Pinky's fake dating lasted very briefly. Not even halfway through the story they transitioned to dating for real. Second, the conflict between Pinky and her mother was resolved too rapidly. Personally, there should have been more build up to them resolving their deep-rooted trust issues.

All in all, it was a light and bright novel to read, as great as expected by Sandhya Menon. There is some profanity, kissing, sexual humor, and one incident of racism. For the most part, it is still suited perfectly towards its targeted audience and demographic. I would borrow this book. It is a delightful summer read (and I would read it again), but it didn't reach that high level of persona impact that would push me to buy it.Plus, I prefer to keep books in my personal collection that start a series, not end it like 10 Things I Hate About Pinky. It was a great book definitely worth reading once, but it didn't have that high level of personal impact for me.


Readers who love romantic comedies with fake-dating and enemies-to-lovers tropes done to perfection don't want to miss reading this book!


The book includes swear words and sexual humor. Even though there are descriptive make-out scenes, no other sexual situation is explicitly described, or even implied. One other thing to note, however, is the occurrence of racism one of the characters faces at one point in the novel. It is minor, but it is there.

Type of Book:
This is the third book in a romantic comedy series for teens. Although part of a series, it can be read as a stand-alone story.
Educational Themes:


This book touches on themes of community and indian heritage, as well as bi-racial culture. It also implies themes of dealing with racism, as well as the act of silent protest. 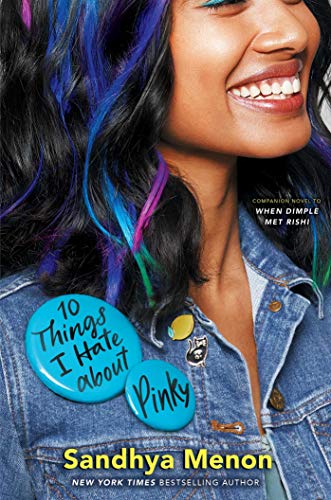 There's Something About Sweetie