From #BoardBook to #YoungAdult - 9 Anti-Racist books for All via @CBCBook Diversity Committee https://bit.ly/2XAbGyB


Adam Baker and Perkins "Perk" Irving have been friends since second grade. They have known Hill Parmar just about as long. Every day, someone is the target of Hill's bullying or worse, his father Bill, the principal. Perk and Adam take every possible opportunity to help one of their victims or pull a prank on the Parmars. Then, Hill makes the ultimate mistake: he targets Perk's brother Tommy, who attends the special education program at the high school.

They are determined to pull an epic prank on behalf of all their victims, but they can't do it alone. After some research, they decide to approach 3 of Hill's victims: Dutch Walker, who had a facial tic and was a regular Hill target; Ray Raymond, wrestler and Mr. Fix-it, and Pearl Wagoner, a concert violinist. In Ray's and Pearl's cases, Principal Parmar exacted punishment on them for things that Hill did.

After explaining the rules - no one gets hurt, no property is damaged, and they don't get caught - Adam and Perk didn't have to wait long to hear "I'm in." Now, five students - who really only knew "of" each other - are planning an epic prank to end the reign of terror of the Parmer bullies. Can they do it?

Parent Perspective:
First, I really like the characters and the opportunities each of them has to share their voice and perspective. The plot focus is the prank, but that's just a catalyst. Each of the kids' backstories is very, very real:

The way the author brings these 5 very different people together for a singular - positive - purpose is just awesome. The naturalness of how their relationships evolve has an innocence about it. BUT ...

There is the matter of Bill Parmer, the principal at the middle and high schools. It is very obvious that Hill learned the bullying trade at his father's feet. I get and can accept that. I can also accept (for plot purposes) Bill's diverting school funds for personal use and threatening other teachers. They are adults. What I had real difficulty with, though, is Principal Parmar's coercion and retribution toward students. That isn't acceptable and wasn't necessary.

Yes, this is fiction, but sadly there ARE adults like this in the real world, and 5 Times Revenge suggests that kids can take matters into their own hands. I recommend reading this book WITH your middle school student so you can talk about appropriate, safe ways to get help.


Readers will cheer for Adam, Perk, Dutch, Pearl, and Ray from beginning to end! They will love the story! But what will make it hard to put down are the opportunities to get closer to the characters themselves. Each is dealing with home situations that are uncomfortable, scary, and unsettling - and readers will not only recognize themselves or their friends in these characters but appreciate their honesty.


Not disclosed in the blurb or on the book jacket is the fact that one of the bullies is Bill Parmar, the school principal. In his role as principal, he bullies other adults and uses his power to exact consequences on students who make claims against his son. He is one of the targets of the prank the "5" are planning.

Some adult readers may not be comfortable with either of these themes and may want to read this book with their children.


Each of the main characters is dealing with issues at home, as well as school. Their lives are different but they are not rare or out-of-the-ordinary. Each personal story is a door to discussing these types of experiences, as well as empathy or compassion.

The group decides to take dealing with bullies into their own hands. Yes, it is fiction, but the story creates opportunities to talk about other ways to get help with bullying; especially, as in this case, with an adult who is in a position of power. 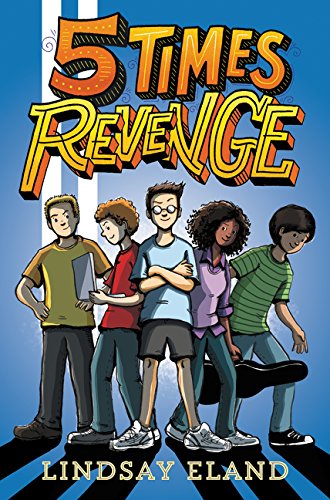