NYC public elementary school teachers, I know there are many unknowns right now, but if you are reading one of my books with your class/book club and would like a free virtual Q&A session with me during the upcoming school year, my DMs are open. ❤️(PS75 class of '79)

Gonna grab a glass of lemonade and sit-a-spell to listen. August is perfect for audiobooks. [Okay, every month is, but August is just hotter.]


Julian lives with his mother, father, and two older brothers in Cuba. His father, an architect, has built a nice life for his family. When dicator Fulgencio Batista is ousted, people start celebrating Fidel Castro and his reolution. With the new rules, many people are trying to leave; others send their children to America, hoping they can come later. When Julian's mom learns their children can be taken away, she secures fake passports and makes arrangements for Julian and his brothers to come to Florida.

When they arrive, the boys learn that their stay is temporary, and the camp director seeks to find orphanages or foster homes for the children. When his brothers run affoul of the director one too many times, they are sent to an orphanage in Denver, CO. Now Julian is all alone. Angelita and Pepe, friends from Cuba, assure him he's not alone. Through them, he meets Tomas, who invites Julian to join him on his boat any time he wishes. Conditions continue to deteriorate in the camp, and finally, Julian decides to leave. Angelita helps him get to Tomas, who lets him stay. Tomas shows him a different - but dangerous - way to make money. Ultimately, their plan is a success and Julian is reunited with his mother and brothers in Connecticut.

Teen Student Volunteer (17):
Through Caballo, Julian and the other characters learn what it means to have a revolution. They learn what democracy means, and how to effectively fight against a tyrant. Through these characters, we the reader learn what Cuban immigrants had to deal with when coming to America. Being separated from family, being poor, and having no resources. 90 Miles to Havannah is about overcoming drastic changes you go through when being an immigrant in America as it tells the story of a boy wanting to grow up, learning what it is to be an adult.

I enjoyed this book and would read it again. For the amount of story and history it tells, it's a fast and easy read.. The ending was a little unrealistic compared to what mostCuban immigrants faced in the 1960s. Most people were not as fortunate as Julian and his family, but having a happy ending once in a while isn't so bad.

BTSYA  Volunteer Reviewer / Adult Perspective (41):
90 Miles to Havana gives readers a glimpse into the start of the Cuban Revolution through the eyes of a child. This is a story of courage and survival that is upbeat and emotional. The exciting experiences overpower the sadness of the concept. I found interesting was the different ways the children found to make extra money once in the United States, they worked in fields, sold hats to tourists, put up and took down beach umbrellas, entertained tourists with drawings, and sold homemade drinks. Various adventurous events that will keep you wondering what will happen next.

I liked reading how Julian was able to overcome his fears.  I also enjoyed reading about the friendships he made that he held close to him. All the characters were interesting in their own right. The importance of family and friendship really stand out. I would recommend it for ages 11-14. I think it would be a great book to check out on a trip to the library.


Readesr interested in the Cuban Revolution or who love historical fiction will enjoy Julian's story.


None noted by this reviewer.

Type of Book:
This is a realistic, historical fiction novel about Operation Pedro Pan.
Educational Themes:


Although this is a work of fiction, Operation Pedro Pan is an historical event. If your reader is interested in learning more, there are lots of books about the Cuban children who were sent to the United States, as well as Fidel Castro and his Revolution.

Our teen reviewer added themes of the pressures of adapting to a new setting, and how a revolution or political turmoil affects people and families. The book offers the opportunity to learn about what a revolution is and what it means to be/live in a democracy, as well as using said democracy to deal with a bullies and dictators.

Teachers Helping Teachers has a discussion questions to use with middle-grade students. 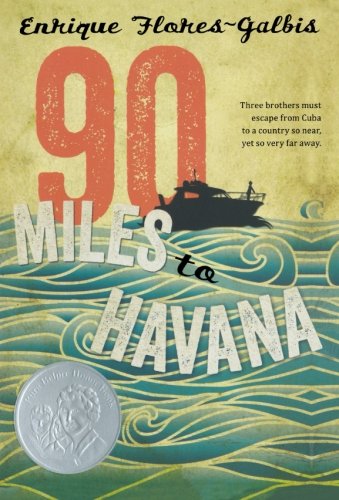 My Havana: Memories of a Cuban Boyhood