Three years after her mother’s death, 16-year-old Grace Blakely returns to Embassy Row. Some of the world's most powerful people reside in this row of buildings on the perimeter of Adria’s capital city. It is where her mother was killed.

Despite three years of endless hospitals and medications, she has not forgotten what she saw: the Scarred Man shot and murdered her mother. Despite what everyone says, she refuses to believe that the death was an accident. Despite what everyone thinks, Grace knows she’s not crazy, and she’s determined to make the Scarred Man pay. ears of being treated like she’s fragile, volatile, and delusional have made Grace reluctant to trust anyone. Her impulsive risk-taking nature doesn’t help her reputation.

Grace’s grandfather, the American ambassador, wants Grace to start a new life on Embassy Row. She also hasn’t seen him since her mother's death. She'll return, but she has her own plans. As she seeks to avenge her mother’s death, Grace finds help in unexpected places. Grace meets kids her age who understand the treacherous life on Embassy Row. There are finally people who believe her, and Grace starts doubting if others always alienated her—or if she alienated herself.

BTSYA / Teen Reader (16):
The characters and dialogue can feel cliché at times, but the author does an amazing job creating an unreliable narrator. You will ride a rollercoaster of emotions as you follow Grace’s growth since it’s difficult to judge the veracity of her thoughts. A first-hand look at Grace’s attempts to cope with trauma, paranoia, and grief will make you eager to see her heal.

I recommend All Fall Down to pre-teens and teenagers. If you like this book, then definitely read the whole trilogy. The author has also written similar series about international affairs and espionage, so check those out too!


Readers will overlook the fact that the story feels a bit cliché at times because Grace is a character who will keep them on their toes, wanting to know more, and cheering her on. Have Book 2 handy!


VIolence is part of the plot.

Type of Book:
This is the first book in a trilogy that features an unreliable narrator trying to unravel her mother's death.
Educational Themes:


This is a fictional mystery meant for fun. As our reviewer points out, Grace is a bit of an unreliable narrator. With two more books to go, what things do your readers think will turn out to be true? what will be false? 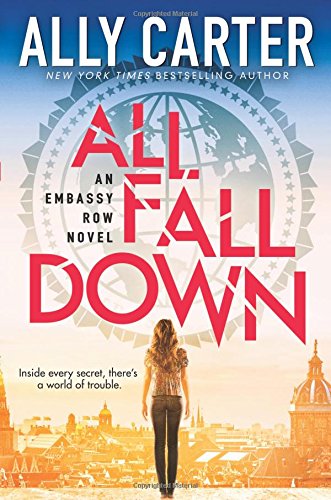 Escape Under the Forever Sky