Ally loves to pretend she is Ally-saurus, a dinosaur. Her friend Kai loves to perform, and his little brother Petey loves to play with his teddy bear and yell "bear." They have fun together. When Maddie, the new neighbor, decides that everyone is going to play monsters, she tells them the rules of what a monster should look like (not a dinosaur), act like (not a dancer), and say (not "bear"). It's not fun anymore. When Maddie takes Petey's bear, Ally-saurus sets some rules of her own!

Parent Perspective:
Young readers are more likely to see themselves as Ally, Kai, and Petey, even if they have a little Maddie in them. The story is more layered than it first appears, and kids are likely to get each one. From being yourself and having fun, to dealing with change and being the new kid, to standing up for your friends ... there are great life lessons.

The illustrations are perfect for young readers. Active enough to move the story, but not distracting from it. I especially love the crayon drawing "overlays" to create visuals for the kids' imaginations.

Highly recommended for preschoolers and early-elementary readers. Even though Maddie is a new kid, she embodied traits young readers might think of with an older sibling.


Imagination, pretend play, problem-solving... it's all packed in this picture book with life lessons that will have young readers roaring along with Ally.

Type of Book:
This is a picture book about friendship, compromise, and being yourself.
Educational Themes:


Let the illustrations be the catalyst for talking about the story. Ask your reader what they see. Not just what's happening, but character emotions, too. Don't forget to ask about Maddie's emotions! It is easy to see how Ally, Kai, and Petey feel, but what about Maddie? Why do they think she was bossy? 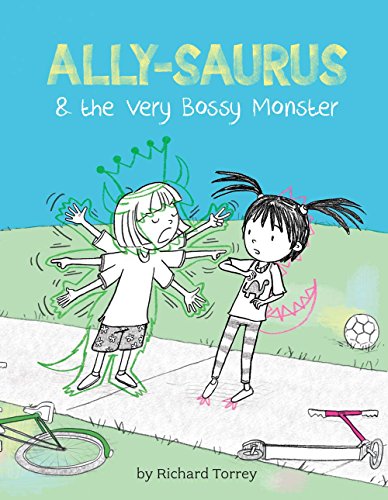 Koala is Not a Bear

I Love You (Almost Always): A Pop-Up Book of Friendship