Iin 1968, the eyes of the world were on the Space Race, a prodcuct of the Cold War. For years, the United States and Soviet Union had been trying to prove to each other that they could control space and explore it. Despite the claims, the United States fellshort and kept losing ground to the Soviets. With only months away until the Apollo 8 launch, NASA's directors make a historic change to the mission. A change that would revolutionize space exploration.  This book details not just what happened on earth, but the journeys Frank Borman, Jim Lovell, and Bill Anders, the three astronauts who were part of this historic voyage.

BTSYA / Teen Reader (16):
Apollo 8: The Mission that Changed Everything is amazing. It is an incredibly in-depth, interesting non-fiction novel that does a great job at setting the context of where America was at the time, detailing events related to the rocket and mission itself, and incorporating quotes from people directly involved in the space mission. This is a fantastic read for anyone interested in scientific history, aviation, space exploration or physics. Apollo 8 is highly recommended.

BTSYA / Teen Reader (15):
This is a captivating book that I finished in one sitting! I must add, though, that it is laid out in a way that I found to be a bit confusing at times. It alternates between a main story  narrative and additional information on inset pages. Sometimes these blue pages break up sentences into two pieces, pages apart and cause you to forget what you were reading previously. Losing your train of thought is especially true if, like me, you read the blue pages as they appear so that nothing is missed. If you skip them and continue the story it will flow as it should. Based on the font, page size, and images, it looks like Apollo 8 is geared more toward children. But the size (more than 250 pages) and the vocabulary could be confusing for less experienced readers to understand.

Overall, the book is still captivating despite how much attention I gave to one setback. Examining the reasons why NASA was so desperate to achieve its goals creates the feeling of a desire for success, even for younger readers that didn’t live through the Space Race era. To reiterate, Apollo 8: The Mission That Changed Everything is a good book  for young readers interested in space and science and would make a nice gift.

BTSYA / Teen Reader (14):
This is a very detailed, captivating book. It immoratlizes this mission making it second only to Apollo 11 (in my mind). To be honest, I thought I was reading an ever-expansive novel, not a general non-fiction book. It was so engaging knowing what happened during the Apollo 8 mission, and the author makes it even more enthralling with his clever use of diction. Just when you think you have everything you want to know about Apollo 8, a new topic presents more info and makes the already notable Apollo 8 mission even greater. Like the main characters in a good story, Borman, Lovell, and Anders were brought to life by clever descriptions and lots of quotes, as well as detailed information about their reasons for coming onto the mission.

As incredible as Apollo 8 is, it does have flaws. Mainly, it randomly cuts through plot points to introduce facts that would have been better at the beginning or end of a chaptes. I would be reading a suspenseful event and the text immediately cut into a random fact about rocket science or NASA's philosophy. I didn't lose my place in the story, so to speak, but others may find it distracting.  I would recommend this if you are interested in space missions or doing a project on the subject. This book has  kindled my interest in space, and people should read it.


Think history isn't exciting? Then you haven't read Apollo 8. Despite its heft (270+ pages) our teen reviewers said it was beyond interesting - captivating, incredible, amazing! Praise doesn't get much higher than that!!


There is no profanity or off-color content. Scientific research and aviation are described using technical terms related to the subject matter.

Type of Book:
This is an illustrated history of the Apollo 8 mission. It is told in narrative nonfiction, much like a novel.
Educational Themes:


There are many avenues to pursue in furthering the discussion about this book. Share with your child your own memories of space exploration as a kid. It doesn't have to be Apollo 8. What do you remember about the various missions to the moon? What was it like when NASA was planning a launch?

There is plenty of geo-political content, as well as opportunities to discover biographies about some of the people involved in the Space Race. 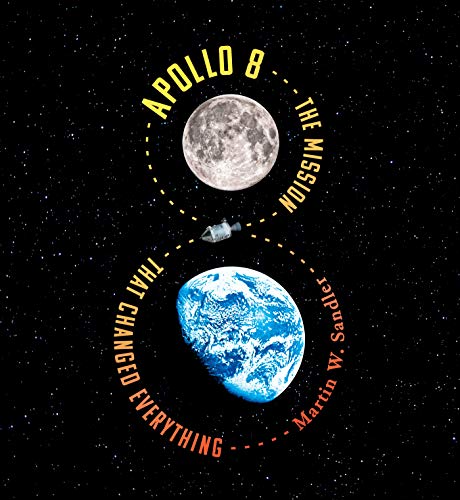 Buzz Aldrin: Reaching for the Moon