... Because who doesn't love #dragons? 40 Picture Books About Dragons by Afoma at @ReadingMG https://bit.ly/3RrFLZM | #PictureBooks #ReadAlouds


Ozzie Pinkerton and Tommy Ross have known each other since second grade, and have been boyfriends since middle school. Now they are seniors in high school. When Tommy vanishes without a trace, Ozzie is the only one who even remembers Tommy’s existence. Ozzie is intent to get his boyfriend back and face the struggles of senior year, even if it is without Tommy. When he is partnered with Calvin for a physics project, he finds his emotions taking over even while he is trying to find Tommy. Ozzie may face more trouble than he thought when he finds out the universe is shrinking.

BTSYA / Teen Reader (16):
At the Edge of the Universe is a coming-of-age story with a supernatural twist. All the characters are part of the LGBTQ community, and I am glad they are represented in this book. The struggles of everyday life can be seen not just in Ozzie’s life, but the other characters, too. Each has his/her own passions, flaws, and their own struggles. That made them all the better because as a reader I get to see how different people cope with their trauma and problems.

Many readers will relate to Ozzie’s troubles with family and friends, pressures of going to college, and life in general. I learned a few important life lessons about choice and moving on, as well as some cool things about physics.

Some readers may find Hutchinson’s book to be too long, but you might miss out on the twists and turns of the story. Even though At the Edge of the Universe has some negative elements, I enjoyed the book. This is a novel for anyone 14 years or older. The book would make a great gift for fans of LGBTQ  and/or coming of age stories.


Readers who love science fiction mysteries - with plenty of science and some realism - won't be able to put down At the Edge of the Universe until the end! Anyone looking to diversify their reading and who want LGBTQ characters will want this book!


Readers will have to watch out for the strong language, sex, violence, self-harm, abuse, and drugs. I Suicide is a theme in the plot, and the author includes telephone numbers for the Suicide Prevention Hotline and the Trevor Project to help those who may need it. 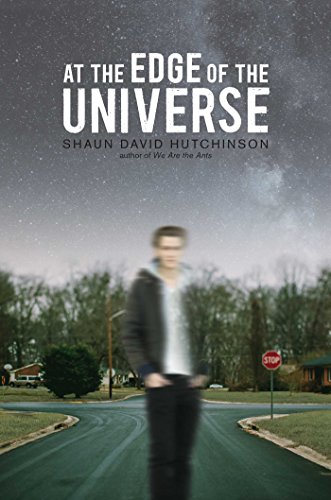 We Are the Ants

The Darkest Part of the Forest

The Five Stages of Andrew Brawley: A Novel

The Apocalypse of Elena Mendoza