In this memoir, award-winning author Walter Dean Myers shares the story of his early life growing up on the Streets of Harlem, NY. Myers lived with the mother of his half-siblings and her husband. As a youth, he struggled with his speech, got into many physical conflicts. He loved to fight and, because of his aggressiveness towards others, earned the degrading title of “bad boy.”

However, behind the athletic, tough persona was an avid reader and writer who felt most at home flipping the pages of his books. He spent much of his youth trying to figure out how to balance his life as African American, male, and literature lover. Despite being considered a gifted student in his middle school years, in high school seeing him in class was more of a surprise than his absence. His attendance dropped to tragic rates in high school, but there were several key figures in Myers’ life – his mother, Frank xxx and Dr. Holiday – who helped him become the man we know him as today.

BTSYA / Teen Reader (17):
Bad Boy: A Memoir is an incredible text. The author’s ability to pull readers into such specific instances of his life is extraordinary. I love Myers’ use of the phrase “bad boy.” Adults constantly tell children that they are bad, but seldom realize the effect this label can have on a child. One of the recurring themes in Bad Boy: A Memoir is that there is more than meets the eye. Myers’ peers did not know the depth of his character. They simply saw him as a troublesome African American boy, and instantly labeled him. Behind this was an intelligent young man with layers and passion.

I also appreciate and admire the author’s ability to reflect on the totality of his life. At 64, Myers can remember the thoughts, feelings, and motives he had as an elementary school student. Even when he reflects upon wrongful actions, he looks at them as he saw them then and as he sees them now. For instance, later in the novel, Myers implies that he wishes his relationship with his mother could have continued on the strong path it once followed.

One of my favorite things about the book is how much the setting impacts his lifestyle and how you can feel that from his writing. Harlem is truly a unique place. For Myers, it is not just simply where he lives, but the place he calls home, even though he was not born there. To a New York native or anyone who feels that their city makes them who they are, it is easy to relate to Myers’ love for his locale.

As unique as this memoir is, there are a few minor shortcomings. I found it difficult to keep track of what grade or age Myers was when he was discussing certain events. The ending feels rushed. With the  term boy is in the title, this is about Myers’ youth, but I would have liked to hear more about his transition to becoming an author. He talks about joining the army and reading James Baldwin after high school, but I would have loved to get the same depth and explanation as to how he became an author as I did for other events in his life, even if it meant a longer novel.

I recommend this to teens ages 13 to 17. It is an easy read, but the people in this age group may find – and need – Myers’ message the most. Middle and high school are transformative periods in a student’s life, and hearing the hardscrabble story of a successful minority may have more impact on this age group (vs. younger audiences). This is a book to borrow from the library.


Unique and yet universal, there is a timelessness to Walter Dean Myers' recounting of his childhood that will resonate with teens today. It provides insight for non-Blacks to understand his ways of thinking, and for people of color it says "what you are labeled is not who your are, or what you become." Powerful stuff that readers will be surprised they like.

Type of Book:
This is an autobiography about the childhood of award-winning author and Children's Literature Ambassador Walter Dean Myers.
Educational Themes:


Despite its setting in New York City many decades ago, youth of today will find parallels to their own experiences. The title itself is a great starting point: why are people labeled? and what happens when you are labeled? Is there a difference between a description and a label?

Another launching point is to list the people who influenced Walter Dean Myers' life. Did he seek them out or where they already "there." Ask readers to answer that question, then consider it in their own life. Who are the people they seek out for help? who are the people helping and supporting them that they never really thought about before. 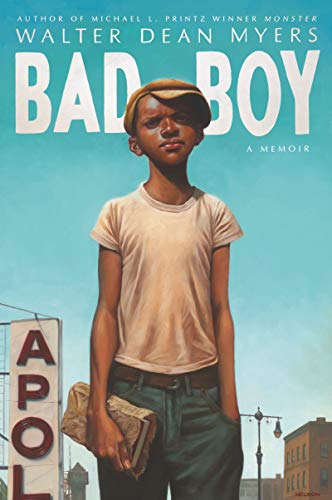