In the late 1800s and early 1900s, the Greenwood District of Tulsa, OK, was known as Black Wall Street. Despite discrimination, segregation, and white efforts to limit or restrict the success of Black citizens, the Black community thrived socially, economically, and spiritually in Greenwood, with Black-owned businesses serving the community's needs and Black homeowners living in this affluent neighborhood.

However, the growing success and recognition were not welcomed by all. Whites, both locally and across the south, pushed back wherever and whenever they could, Then they found an "excuse" to take action against Greenwood. Dick Rowland, a black man, was accused of attempted rape in an elevator. He was seen running from the scene and instantly became a wanted man. Two days later, Greenwood was besieged by angry mobs. Homes and businesses were burned to the ground, and people of all ages were killed.

Greenwood was silenced, but worse, the atrocities were kept quiet, too. Despite its significance in US history, generations of people (not just students) didn't know about the events of June 1, 1921, outside Tulsa. The author walks you through the history and also tells you what changed. What prompted these more open discussions about the Tulsa Race Massacre?

Parent Perspective:
This book makes me angry. Not for its content but for the despicable behavior of so-called human beings. It is "easy" to be outraged at the "self-righteous" behavior of people who took violence into their own hands, but as this book points out, there have been many, many white people who could have been wielding their same powers for good and said "enough" and "this is not right," instead of telling people to be quiet. It also makes me sad how many of these behaviors and the stupid thinking still exist today. It has been 100 years since the Tulsa Race Massacre, but as I read this, I kept asking myself "has anything really changed?"

Colbert creates an effective, fascinating story of the Black Tulsans of the time. It isn't always pretty, but their stories are presented in ways that allow the reader to have a sense of time and place. This was the part of the book I enjoyed the most, and I wish the author could have focused exclusively on Tulsa and Greenwood. I understand why she couldn't, but much of the ancillary content (Reconstruction, Jim Crow, KKK, Andrew Johnson, destruction of tribal lands, et al) is well-covered in other books. It muted the emotion and urgency of life in 1921 Tulsa and disrupted the flow enough to give the content more of a textbook feel than the historical narrative that opened the book.

Overall, I would recommend Black Birds in the Sky to readers 14 and up - and that includes adults. The book is well-written and presents a piece of history we should know and be as knowledgeable of as we are the Revolutionary and Civil Wars.


Readers fascinated by history or who love learning about influencers they've never heard of before will find this an engaging, enlightening read.


Although not gory (as in horror story gore), violence is a continual occurrence in this book. Additionally, the author uses direct quotes that include the use of profanity and racist terms.

Type of Book:
This is a history of the Tulsa Race Massacre, the events, and the people that were impacted or contributed to this historical event.
Educational Themes:


The structure of the book allows readers to branch out into different areas, not just the Tulsa Massacre itself. Colbert introduces a number of influential people in Tulsa's history whose achievements will interest young readers even today.

With regard to social issues - prejudice, racism, violence, unjust laws - there is plenty to discuss not just historically but in how far we have (or haven't) come in the 100+ years since. 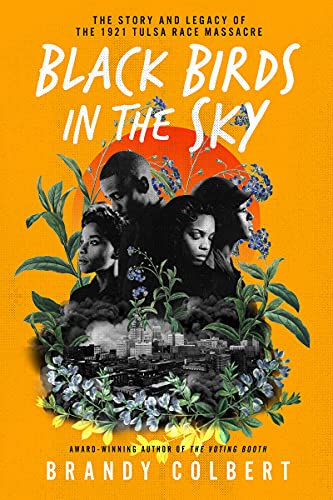 Spies of Mississippi: The True Story of the Spy Network that Tried to Destroy the Civil Rights Movement

Night of the Red Moon