Little Bao makes sure to always pay his respects to Tu Di Gong, the local earth god. He is also captivated by the operas about the gods that he sees performed in his village, Shan-tung. The Gods of the Opera stay with him as he goes about everyday life doing chores and being with his family. When missionaries and Chinese soldiers start tormenting his village, his life is turned upside down. Tu Di Gong is smashed into pieces by an angry Christian priest and the villagers' supplies are stolen.

Desperate to defend himself and his village and prove his worth, Little Bao asks  Red Lantern Chu, a traveler who aided his village, to teach him kung fu. Tired of the suffering and bad news, the gods of his faith present Little Bao with an opportunity. He teaches kung fu to fellow villagers, so they can harness the gods' power. He recruits them as an army of Boxers and starts a rebellion intended to rid his country of the Christian “foreign devils” ruining China. Along the way, he will make many friends and enemies, but soon enough he will find that the cost of his cause may have been greater than he once thought.

BTSYA / Teen Reader (17):
Boxers is an incredibly captivating graphic novel. I immensely enjoyed Gene Luen Yang’s master storytelling and I read the entire book in one sitting. There isn't a thing that failed to catch my attention. The themes cast for the reader are multifaceted and push you to acknowledge the convoluted reality of Little Bao’s revolution.

Huge props to Gene Luen Yang for staying true to the historical context of the Boxer Rebellion and managing to craft an engaging graphic novel at the same time. Through his expressive art, Gene Luen Yang does an amazing job of blending historical and fictional elements. He uses bold colors to make the gods stand out along with very animated facial expressions to add to the action-packed storyline. All of which makes for a great reading experience! I would recommend giving this a read!

Boxers can be a good starting point for getting readers to learn more about the more unknown events of history. I for one, know that I will be researching the Boxer Rebellion as a result of reading this work.

As much as I enjoy this graphic novel, there are things readers may want to keep in mind. The Boxer Rebellion was a violent and gruesome event and the author's art reflects this. Death and violence are toned down using simple splashes of red. Also, characters reference/discuss superstitions about women and their bodies. Last, because of the level of slaughter, some characters were not fully developed.

Boxers would make a great gift for fans of graphic novels or history. I recommend this for readers 12 and older.


Readers who think history is "boring" will be intrigued by this graphic novel about a period of history that will fascinate and captivate them.


The Boxer Rebellion was a violent and gruesome event that Gene Luen Yang made sure to reflect in his historical graphic novel. There is much blood, death, and violence, but it is toned down in the book with simple splashes of red. A few characters also mention superstitions regarding women and their bodies

Type of Book:
This is part 1 of a 2-part graphic novel series about China in the late 1800s.
Educational Themes:


The Boxer Rebellion is a little-known (by today's kids) but a very important piece of history. It was a clash of culture, religion, prejudice and racism. One question sure to get conversations started: by starting a war, was Little Bao any different / better than the people he fought against?

Reading Level:
2.9
Recommended Age To Read By Yourself:
12 and Up
Recommended Age To Read Together:
10 and Up
Age of child:
Teen STAR Review Team, Be the Star You Are!™ . Reviewer age: 17
Purchase Recommendation:
Borrow, for sure. Readers who love history and graphic novels would probably read this multiple times to explore the nuances, so for them it is a buy. 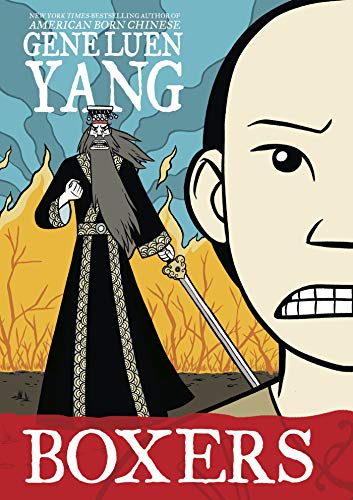 The Woman Warrior: Memoirs of a Girlhood Among Ghosts

Revolution Is Not a Dinner Party