The bubonic plague is a disease first discovered in 542. A historian named Procopius is credited with the discovery. The plague spread to the Mediterranean Sea, then India and China. After killing tens of millions of people, the plague disappeared for 600 years. It resurfaced again in 1346 in Italy, after the Mongol army invaded. During the 14th Century, 20-25 million people died of plague, with deaths continuing in the millions until 1722, when the plague disappeared again for 150 years. While working in China during the 1890s Mary Niles (an American doctor) discovered symptoms of the plague on eight patients. The plague had once again resurfaced and began to spread through China and into other countries.

With the invention of better microsope and Louis Pasteur's germ theory scientists were able to figure out the cause of the bubonic plague. Research was helping, but there was still no cure or prevention and the plague was coming to America. Bacteriologist Joseph Kinyoun had proof that there was plague in America, but the Governor of California (where Kinyoun lived) denied its existence and forced Kinyoun to leave the state. Despite the governor's attempts to interfere, work went on to stop the spread of the plague, which was being carried by rodents. Over time, with rodent exterminations, antibiotics, and other medicines, bubonic plague deaths decreased. Although cases still occur to this day, the chances of surviving plague are high.

BTSYA / Teen Reader (14):
There are many things I like about this book. First, it is very informative. This book has a lot of information about the bubonic plague; how it has changed over the past few centuries; and how to avoid contracting it. Second, I also liked the statistics, though some of it is scary to know. To hear that millions of people died of a disease so very harmful makes me a little afraid of the plague.

Because some of this information does have the potential to cause fear, Bubonic Panic is for readers 12 and older. Even though I have a bit of fear, this book is very interesting and informative, and that is why I recommend reading it.


A fascinating blend of science and history will have readers turning the page to learn more, shaking their heads about how something from the early 1900s can happen again in the 21st Century (2020s).


This is a nonfiction book, so all of the material is factual. That said, those who are queasy about discussions or images of disease need to be aware that the material can be "graphic."

Type of Book:
This is a nonfiction chronology of the bubonic plague, the people who studied and found its cause, and the state of the disease today.
Educational Themes:


There is a lot to unpack in Bubonic Panic. As our reviewer points out, there is a LOT of data, particularly statistical data. What may be most valuable to young readers today is to overlay that content - particularly governmental positions, emotional reactions, citizenry choices - with what we are facing in 2020 with the global COVID-19 / coronavirus pandemic. 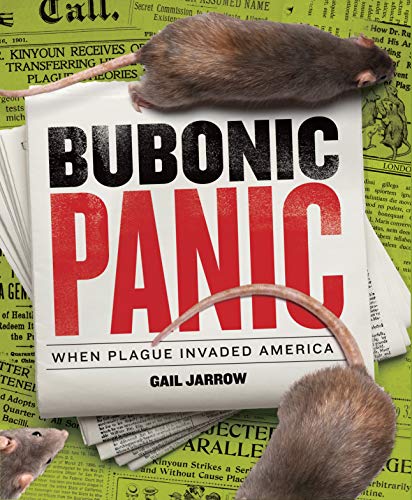 Bones, Brains and DNA: The Human Genome and Human Evolution

The Tell-Tale Brain: A Neuroscientist's Quest for What Makes Us Human

Brain: A 21st Century Look at a 400-Million-Year-Old Organ