Y'al know we love #audiobooks ... Check out the list and here some clips in this @TCBRbookreview post 5 Excellent Audiobooks for Ages 8 and Up: From Silly to Serious to Out of This World https://bit.ly/3fqB1RQ


Felix Carmer III, an orphan, is the apprentice Antoine the Amazifier, but that doesn't mean he believes in magic. His curiosity and penchant for learning have shown him everything has a process and can be explained. Enter princess Grettifida, a faerie with one wing and the power to create fire, who whose destiny is to rule the Seelie Realm. Like Carmer, she has a sense of adventure. Despite the fact that faeries are going missing, she continues her nightly forays into Skemantis, leaving the safety of the Arboretum behind. The two meet on the streets of Skemantis when an Autocat (a mechanized clockwork creature) tries to attack them.

Thus begins the unlikely friendship and a quest to figure out how to stop the Autocats and the person who is kidnapping and killing faeries to not only power these predators, but the entire city of Skemantis. The two are convinced that there is a link between the missing faeries and the magician's contest at the Orbicle, but are they willing to risk their lives and reputations to figure it out?

Parent Perspective:
I loved the "feel" of the story and felt transported to a time when electric power was just coming online. The circus camp, Orbicle, and Arboretum, as well as the Vallows,  are such vivid places. There is plenty of fantasy and adventure, but for me, the heart of the story is the characters. Queen Ombrienne, Gideon Sharpe, and Titus Archer on one side and Antoine, Madame Euphemia, and Bressel on the other. Their relationships with Grit and Carmer ebb and flow like real life, highlighting love, broken trust, power, and ultimately forgiveness (though not in all cases).

Grit is a faerie who can't fly. She was born with only one wing, and Carmer, thinking he is being a good friend, designs a mechanical wing. The scene where Grit discovers the design and the ensuing discussion is enlightening and should create some great discussion. It is one of my favorite parts of the story because it addresses "do-gooded-ness" and assumptions.


Well-paced adventure, wonderful imagery, and great characters will charm readers and have them ready for book two just as they finish reading The Wingsnatchers.

Type of Book:
The first title in this middle-grade fantasy series about friendship, perseverance, and personal responsibility ... with some magic, too.
Educational Themes:


The book is meant to be enjoyed as a fantasy adventure; however, several characters and relationships create natural themes for discussion:

Since this is Book 1, ask your readers to envision what the adventure may be in Book 2. What characters will make the trip, which will be left behind? 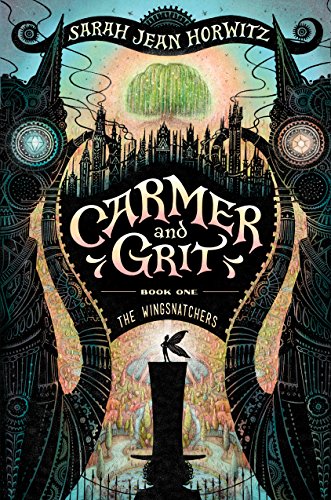 The Doorway and the Deep