After pulling off the heist of the century, Kaz Brekker and his crew are now fighting for their lives. Doublecrossed and down a team member, the Dregs are in a tough spot. Brekker's most prized possession has been taken away from him; and the crew is low on resources, allies, and hope. The highly addictive drug, Juda Parem, which turns Grishas incredibly powerful is still a mystery to be solved. Old and new enemies arise. Once again, blood will be shed on the streets of Ketterdam.

BTSYA / Teen Reader (14):
Just like the first book (Six of Crows), I love the characters. Kaz Brekker, the anti-hero, is just so awesome. We see a more vulnerable side to him and learn more about his backstory. It makes his character seem more real and adds perspective to the motivation behind some of his actions. The plot is still true to what happened in the first book. I found it interesting, but it is not as thought-provoking as it could be.

I recommend Crooked Kingdom for tweens to teens. There are mature themes, but they are not gory. Don't read or buy until after you've read Six of Crows. It is based a lot on the first book and reading that before would really help understand the story.


Great characters and lots of action make this sequel as exciting as the first book: Six of Crows.


None, according to our teen reviewer. She notes, however, that going beyond the violence, there are themes of death, sex trafficking and PTSD. She defines it as "not very gory."

Type of Book:
This is the second part of a two-part fantasy set.
Educational Themes:


This is a book to read for fun. 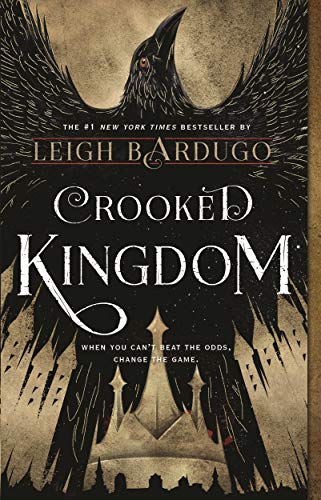