Eragon (15) lives with his uncle and cousin on their farm. While exploring an area called the Spine, he a strange blue stone falls from the sky. He takes it home, thinking it will buy the family food and supplies for the upcoming winter. It is far more valuable: it is a dragon’s egg. It turns out, an elf cast a spell on the egg to keep King Galbatorix from destroying it. [Galbatroix is a Dragon Rider who went mad after his dragon died.]

After the dragon hatches, Eragon names it Saphira, and realizes they share a telepathic link. When two of the king’s servants come to town, Eragon successfully hides Saphira, but his uncle is killed. With nothing left to lose, Eragon leaves home and vows revenge. On his journey he meets mentors and companions and becomes a Dragon Rider tasked with maintaining peace in the kingdom.

BTSYA / Teen Reader (16):
Eragon’s adventure is a captivating tale. The Eragon books would be a great gift for kids trying to figur out who they are. With themes of good versus evil, friendship, and adventure, it is a safe choice for young fans of fantasy. Eragon's tale of embracing dangers and difficulties can be inspiring to people afraid to go against the status quo. This novel is best for teens13 and older due to some of the violence, mentions of death and imprisonment, and Eragon risking his own life.

BTSYA / Teen Reader (14):
This book is… ok? It is like watching a movie that jumps from point to point with no explanation, and little information about the charactesr. Let me back up to the good points.

First, for a book written when the author was 14 is impressive. It is a delightful fantasy with many adventurous  elements, impressive characters [each with their own motives to help or harm Eragon], and descriptions. Eragon introduces interestingly new fantasy concepts too, like telepathic speaking with dragons, and that ANYONE can learn magic. Action scenes are pleasing, with breathtaking and expansive locations. The story is adventurous and long, full of surprising twists and turns. Finally, the themes are memorable: friendship, honor, and protection for those whom you love, following your destiny. It is fun to read and there are elements sure to please fans of The Lord of the Rings and other fantasy novels!

Unfortunately, with more bad than good in this book, my review is mixed. It took the author 6 years to complete the book, yet it has some unfathomable mistakes. When I was reading Eragon, I felt as if I was reading derivative ficton for LOTR. The plot and elements are similar to the point of feeling like a knock-off. Even if this book was not inspired by any other works, there are still problems. First, dialogue. Sometimes it was appropriately dramatic and descriptive, at other times I felt like I was "listening" to a children's television mystery. Second, there are lots and lots of . clichés. Clichés are concepts that are overused in stories, and unfortunately, Eragon is no stranger to these. In some cases the characters’ descriptions are such that we are more familiar with them than what that point in the story warrants. They jump around and make things confusing. Last, the narrative is clunky. In some scenes, Eragon keeps on asking numerous questions until it gets annoying; in others, the telepathic conversations with Saphira are awkward.

The story has a good climax and the ending is tied up well, especially the war sequence. Overall, I would describe Eragon as "a magnificent fantasy adventure with a memorable cast," but that doesn't mean there aren't serious flaws. I wanted this book to be brilliant, but it wasn't. It is a fun book to read from time to time. I have not yet read Book 2, but am planning on it. I did not like this famous book as much as I thought, but I still cannot wait to see what happens to Eragon and his dragon after!

BTSYA Volunteer / Adult Perspective (23):
Eragon is a wonderful high-fantasy adventure involving intelligent dragons, revenge, magic, mad kings, adventure, and family. This is a rather thick book, and the three sequels are no thinner. However, every page is worth reading. A lot of time is spent world-building, which makes it a delight to read. Having first read this book near its release, I easily found myself slipping into its pages time and time and time again.

This first book in the series does have some issues with the writing quality, but the story is fantastic. This book (and the rest of the series) is a perfect gift for anyone around middle school age. Paolini begins an epic story while keeping the reading level accessible to young and very young adults. I own Eragon in English and in French and can attest to its usefulness when practicing another language. While many readers complain that it is a retelling of a popular hero’s journey story that shall remain unnamed in this review, I think Paolini took the best elements and makes this story his own.


All the elements of a classic high fantasy adventure AND a telepathic dragon! Lots to captivate and immerse young readers in Eragon's journey to become a Dragon Rider.


There is violence and characters use profanity.

Type of Book:
This is a fantasy adventure that has been compared to J.R.R. Tolkein's Lord of the Rings.
Educational Themes:


As two of our reviewers point out, Eragon has been compared to Tolkein's Lord of the Rings. What do you and your readers think? What is similar? What is unique? 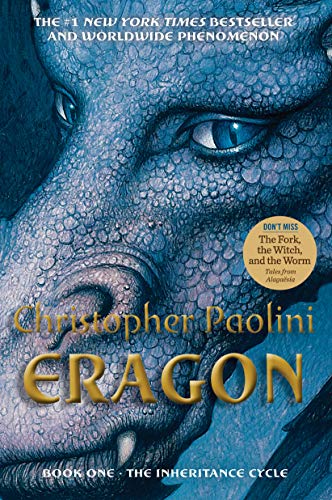 The Sword of Shannara

A Wizard of Earthsea

How to Twist a Dragon's Tale