Marilyn and James Lee are a mixed-race couple living in a small Ohio town in the 1970s. Marilyn, who is caucasian, grew up in Virginia, where she was raised by her single mother, a home ec teacher. Her mother's greatest dream for her daughter was that she would marry a Harvard man. Marilyn, on the other hand, wanted to be more than a housewife. She wants to be a doctor. She excelled in school (physics and chemistry in particular) and earned a scholarship to Radcliffe. When she meets him, James Lee is a fourth-year graduate student and teacher for “The Cowboy in American Culture.” Marilyn's attraction is, in part, because he knows what it’s like to be different. As a Chinese man, he is someone who has been marginalized his whole life. He is enamored with her for a polar opposite reason: with her blonde hair and blue eyes, she fit right in. `

Lydia (16) is their middle child and favorite among the three siblings. Both parents projected their hopes and wishes onto her.  Her mother pressures her to excel academically, while her father pressures her to be popular and belong in their small town. When she disappears and later turns up dead, their entire family dynamic is disrupted.

BTSYA / Teen Reader (13):
Celeste Ng has crafted a noell that is immensely compelling Each of the characters has a distinct personality, and the backstories for Marilyn and James are pivotal for understanding how they behave as parents, as each feels like they are missing something within.

I highly recommend that readers purchase this novel and read it multiple times so that all of the clever little details sink in. There are references to sexual relationships, which makes this for a young adult audience (14 and older).

Type of Book:
This is a coming-of-age novel that looks at life for two adults from different backgrounds and how it affects their family.
Educational Themes:


This is a book written for adults, but that doesn't mean that teens won't connect with the story. Teens will understand the themes of self-acceptance and Lydia's emotions towards her parents. Although they are adults, teens from biracial, multi-ethnic, or single-parent families can also relate to Lydia's parents. 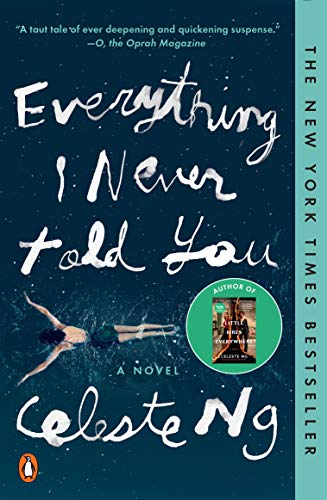