It is only two months since Caraval ended when the Fates (magical immortal beings) were freed from the cards and Legend ascended atop Elantine's throne. Donatella's heart is broken, as she has discovered the one person to ever capture her heart never really existed. Legend has abandoned her, but until recently, has come to her in dreams. When he didn't visit one night, Tella is worried. She leaves Scarlett in charge of her comatose mother, Paloma. When Tella returns, her mother is not only awake but has snuck out to meet with Fallen Star, the worst Fate. They stab each other, and as Tella plans her revenge, Fallen Star kidnaps Scarlett. Once again, everything is on the line and there are choices - hard choices - to be made. Tella must decide who to trust, who to fight, and to whom she should give her heart. Time is running out, and there is no return. Tella and Scarlett are too far in to back out.

BTSYA / Teen Reader (19):
Finale is the end of an incredible trilogy, and I had high hopes for how everything would play out. Those hopes were exceeded for the most part, and Finale kept me anxiously awaiting the next page every time I picked it up. With a story so full of twists and drama, it was even more difficult to see how it would end. Once again, I fell in love with Tella’s character. Her growth in this book plays perfectly off of the events of Legendary. She truly is the star of this entire series and I found myself more than excited anytime I began a chapter involving her.

The world-building for this series is one of its biggest highlights and Finale only continues to build that strength. In particular, I really enjoyed being able to learn a little more about The Fates in this book as opposed to the last, especially Jacks, who also became a favorite character of mine.

There are a few things I disliked about Finale, although they aren’t enough to deter my high rating for the book. The first is the ending itself. Without giving anything away, I wasn’t exactly pleased with how things turned out. Not because I disliked what happened, but because with the fast pace and all the things at stake, the ending felt a little too rushed and not consistent with the ends of the previous books. It didn't ruin the book, but if I could change it, I probably would. I also had hope for Scarlett’s character, especially after she was cast aside to make room for Donatella’s development. Given that this was the final book, I was hoping that with Scarlett developed in Caraval and Tella developed in Legendary we would finally see development and growth for both sisters. That Finale felt more like Tella’s book than it did Scarlett's disappointed me as I genuinely enjoy both of them. While reading, I found myself feeling a sense of disappointment anytime I began a chapter based around Scarlett and her portions of the plot. I’m not exactly sure what happened, if maybe Tella was just such a good character to me that Scarlett couldn’t compare or if maybe there was a bigger issue within the story of the entire series.

Overall, Finale is a good ending to an even greater series. While maybe not be on par with Legendary, I still enjoyed this book a lot and was sad to see the trilogy end. Like the previous two books, I would recommend this for a teenage audience due to its more mature dialogue and plot points. This book would make an excellent gift if given with the other two books and I would certainly purchase it over renting.


Characters use profanity, and there are violence and sexual situations.

Type of Book:
This is the finale in a fantasy/romance/adventure series.
Educational Themes:


This is the book that brings the Caraval trilogy to a close. Invite your readers to share their thoughts: 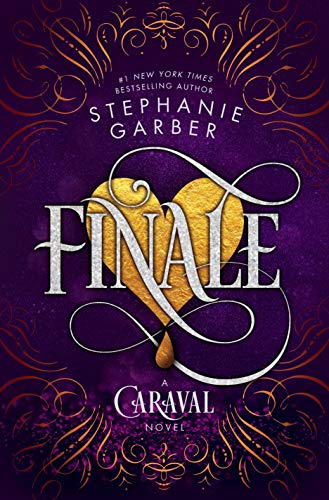