Frederick Bailey, born in Marylad and raised by his grandmother, was a slave in the household of Hugh Auld. For a shor time, Mrs. Auld taught Frederick to read alongside her own children. When her husband objected, Frederick's formal education ended but by then he understood the link between freedom and being able to read. From then on, Frederick sought out anything he could to help him learn to read. At 19 he fell in love with Anna Murray, a free black woman. Frederick put together a plan and took a great risk, but escaped to New York City, where Anna later joined him. Frederick also took a new identity: Frederick Douglass. He quickly became a sought-after activist for abolitionist and women's voting rights because of his speaking skills and thoughtful means of expression.

Parent Perspective:
This an exceptionally well-paced, informative biography for young readers. The early pages have little text, and by the time there is more for a parent to read, young readers are happy to sit while you keep telling Frederick Douglass' story. The author presents his ideas in a way that children can understand, but without talking "down" to them. Highly recommended for anyone looking for an inspirational biography. Be sure to show readers the document int he back where Hugh Ault ultimately released Frederick Douglass from slavery.


Frederick Douglass' story will inspire children to think about history in a way that is relevant to their own dreams and personal values. Readers who enjoy expressive art will appreciate the depth and emotions presented in the illustrations.


None. If your child has not yet been introduced to slavery and how slaves were treated, you will need to decide if you are ready to explain what these realities were.


There is a helpful timeline and excellent resources in the back of the book. This picture book biography is packed with a lot of information that goes beyond Douglass' life, much of which is just highlighted here, but which may pique further interest. For example, most people do not know of Frederick Douglass' efforts to help the woman's suffrage movement. It also paints a good picture of how and where people lived, as well as the types of work that people did in the mid-1800s. 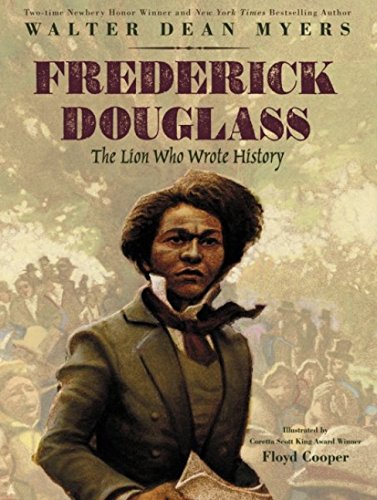