Remember that not everyone is free. These words were written nearly 200 years ago and still feel so relevant. Some days, finding hope is harder than others: 'What To The Slave Is The Fourth Of July?' By Frederick Douglass https://www.npr.org/2020/07/03/884832594/video-frederick-douglass-descendants-read-his-fourth-of-july-speech


John McCline had a hard life on the farm. Not because tending the cows and churning butter were hard, but because he was a slave. His Uncle Silas told Johnny that Abe Lincoln would set them free, and told Johnny that if he was young, he'd join the Union army and fight. So the day some Union soldiers marched by the farm, Johnny joined them. As a soldier in Company C, Johnny helped with the animals and earned the respect of his fellow soldiers when he rescued them.


This illustrated biography introduces new readers to the personal, true story of a slave who fought for the Union Army in the Civil War.


None, other than it glosses over slavery and makes it appear that Johnny was instantly accepted by his fellow soldiers.


"Wow, that's sad ... but good, too." I thought the book would be too young for our daughter, but she looked beyond the easy words to the story.


I am really glad I found this book. It focuses less on the issue of slavery and more on Johnny McCline's life and character. As an adult, and having read other accounts, it seems a little Pollyanna-ish, but I liked it for its focus on personal responsibility and perseverance.

Type of Book:
This is a nonfiction easy reader about a slave who became a soldier in the Civil War.
Educational Themes:


This is an informational biography about a slave-turned-soldier during the Civil War. It would be a good place to start so readers connect with someone first, and then build on their knowledge with other books or learning. 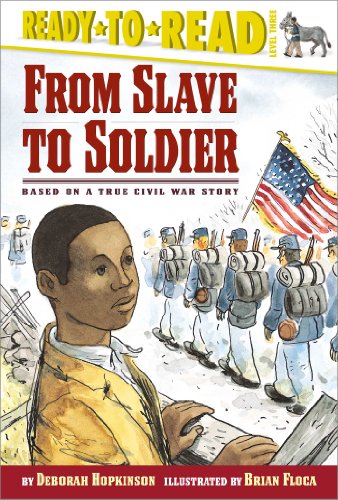