Because today should be a LOL kinda day! Oh No! Look What the Cat Dragged In by Joy H. Davidson, illustrated by Jenny Cooper @theSalariya https://bit.ly/2J9XNiy It won't take but a few readings, and the kids will be reading *for* you! #picturebook #readaloud #booshelfworthy

Yoo In Na Reveals Why She Enjoys Reading Children’s Books | Soompi https://www.soompi.com/article/1351153wpp/yoo-in-na-reveals-why-she-enjoys-reading-childrens-books And that's why she's my favorite actress.


While King Richard is off fighting, his brother John is doing everything possible to take over. Corrupt officials helped John by targeting those loyal to Richard. Matty Fitzwalter (8) saw this firsthand when the sheriff killed her mother. With their castle and family destroyed, it was just Matty and her father, Lord William Fitzwalter, an expert hawker.

With a heavy heart, Matty would spend time with Fynn and his friends, all of whose families' well being was being strangled by the Sheriff and his men. Eventually, this group of friends decides they need to do something. The first was to get more information. Matty changed her name to "Marian" and get herself hired as a maid in the Sheriff's household. Her hawks saved her and would get messages to Flynn (who changed his name to Robin). At the same time, Robin and his friends began robbing the rich to serve the poor. When Robin finds out that Marian has been moved to a lepers colony, he knows that she's been found out and he must save her. Will he get there in time?

BTSYA / Teen Reader (14):
This book is very well written and I quite enjoyed it. I enjoyed the characters and I would like to read a sequel. There are a lot of references to medieval England which makes the book so much more real to the reader. I liked the use of actual vocabulary for training and maintenance of real hunting hawks.

I recommend Hawksmaid for readers 10 to 16. Borrow it from the library. It is the type of book that you read just once. It is a great book and I recommend reading it.

Parent Perspective:
This is a beautifully told story. It draws on the history of the times, and the familiar legend, as well. Matty's story is particularly intriguing and will keep the reader turning pages to see what happens next. She is a strong, positive character - both for her time (women didn't have "careers") but for today, too.


This evenly-paced action and strong, well-built characters shine in this prequel to the Robin Hood legend. It will appeal to all audiences.

Type of Book:
This is an historical fiction novel that draws on the legend of Robin Hood. It has potential as a high interest/low readability book.
Educational Themes:


This novel is for recreational reading. That said, there are factual details about life in England during King Richard\'s realm. As Matty is learning about hawking and hawking terms, we are too. This part of the story is very detailed and interesting.

Reading Level:
5.2
Recommended Age To Read By Yourself:
10 and Up
Recommended Age To Read Together:
9 and Up
Age of child:
Teen STAR Review Team, Be the Star You Are!™ . Reviewer age: 14
Purchase Recommendation:
Borrow, at least. This is a great choice when you're looking for books with strong young women as the lead character. 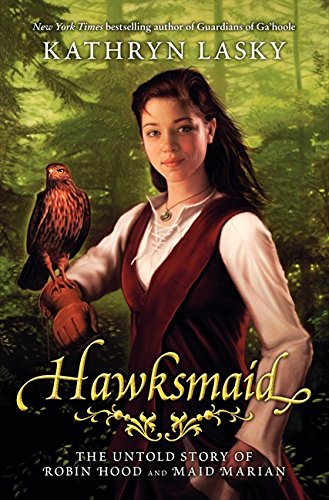 The Princess and the Hound

Crispin: The End of Time