Wernher von Braun developed the V-2 rocket Hitler's military during World War II. In addition to being an engineer, he was a member of the Nazi Party and a colonel in the SS. At the end of the war, the U.S. military brought von Braun and members of his team to the United States in a project known as Operation Paperclip. The US Government wanted full access to his knowledge, so despite the government's knowledge - and von Braun's acknowledgment - of his past activities, he was allowed to enter the United States and received n US citizenship. Von Braun himself acknowledged his affiliation, but his role in war crimes was not investigated fully until after his death. Ultimately, von Braun's leadership was instrumental in the development of the US space program and the creation of NASA.

Sergei Korolev, also an engineer, lived in Stalin's Russia. During Stalin's purge, he was falsely arrested as a traitor and spent many years in a Siberian labor camp. When World War II ended, Korolev was tasked with going to Germany to recover any and everything he could about von Braun's rocket program. He was aided by members of von Braun's team who had decided to remain in Germany. The Soviets had assured them they could stay in their homeland, but ultimately moved them to a secret location in the USSR. After getting the German engineers drunk, the military rounded up them and their families and moved them, lock, stock, and barrel to Siberia.

Both men, working for different governments, were charged with building weapons for their respective militaries. Yet, even as they were "focused" on those efforts, both men were dreaming of being the first to build a rocket that would go into outer space.

Parent Perspective:
The author presents biographical information on both men that allows the reader to appreciate their passion for space exploration. A recurring theme through the narrative is von Braun's identification as an SS officer and his knowledge of the atrocities SS offers committed at Mittelwerk, the forced labor camp where the V-2 rocket was developed. The facts of this association are laid out upfront and in a way that the reader is periodically reminded to think about how the US Government hid the truth and at the same time how we may not have had a space program without him.

Short chapters also allow the reader to easily focus on a particular topic. Sidebars help set the context for the time in which these men were living and doing their research and keep it relevant to present history, too. For instance, she explains how the USSR routinely propagated false information to maintain secrecy around its technology developments. A sidebar describes recent revelations of Russian disinformation in the 2016 Presidential election.

In the Shadow of the Moon is a book that can be appreciated by those with a real interest in space travel. It provides a nice history of the challenges faced in getting to this point in space exploration, and what challenges await for future exploration. It will also be interesting to those who have an interest in the geopolitical aspects historically (the Cold War) and how the environment shaped decisions, potentially with global impact. The author clearly identifies the differences in trying to develop a major world-changing technology in different types of governments. She also describes institutional/cultural biases that impact any endeavor of this magnitude.

All in all, this is a good, easy read for anyone interested in the development of the US/Russian space programs and the Cold War.


Short chapters, with lots of illustrations and sidebars, will captivate not only readers who love history and science, specifically space exploration, but also those who are intrigued by sociology, politics, intelligence, and secrecy.


None specific to this book. The author identifies the atrocities of the Holocaust and forced labor camps, but she does not go into great detail about specific behaviors or events.

Type of Book:
This is the YA version of a nonfiction book about two engineers "competing" to get their respective countries into space.
Educational Themes:


As noted by our reviewer, there is plenty to explore in this book not just for the technological development itself, but also the geopolitical factors that influenced how those programs developed.  Those interested in science will find the descriptions of the testing processes an invaluable, real-world example of the scientific process in action.

In the Author Note, the author talks about her research and visiting locations earlier described in the book. She includes a question about von Braun that visitors are asked after they have toured the Peenemunde Historical Technical Museum: was Wernher von Braun ruthless or ingenious? To that, we would add a second question: did his contributions to science (and specifically the US space program) outweigh or mitigate his involvement in activities at Mittelwerk? 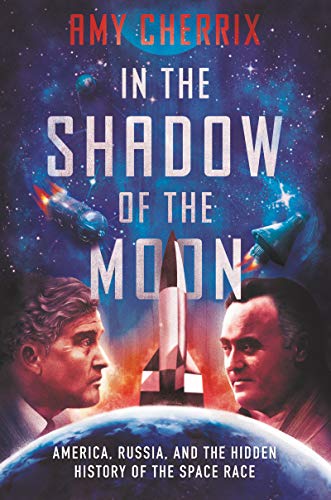 Apollo 8: The Mission That Changed Everything

Bomb: The Race To Build--and Steal--the World's Most Dangerous Weapon