ICYMI (like we did) ... @Literacious builds on a recent NY Times OpEd to "decode" the power of #PictureBooks | Never Too Old for Picture Books https://bit.ly/3aWigGf #Literacy #FamilyReading


The Quinteros fled to the safety of Los Angeles, California, when a Mexican cartel threatened Papi's life. Tio Juan has petitioned for the family to receive asylum in the United States. While they have an attorney to help them, the process takes time. Things take a turn for the worse, agents from Immigration and Customs Enforcement (ICE) arrest Papi and deport him to Mexico, where he has gone into hiding. On a trip to meet Papi and give him some money, Mami and Betita (9) are picked up by ICE and taken to a detention center at the US border. Despite the awful living conditions and her pregnancy, Mami creates a sense of community among the detainees.

Life is beyond unpleasant, but it has a pattern. When Marisel is (literally) thrown into the group, the energy changes. Marisel is a Dreamer, brought to the United States as a child and now almost an adult. Fearless and vocal, Marisel - with some guidance from Mami - rallies the detainees to become activists. Just as they are getting their hunger strike underway, Mami goes into premature labor. Betita is not completely alone. Will she ever see her family again?

Parent Perspective:
Raw, very real, and heartbreaking. There were times when I had to put it down and walk away. The emotions - anger, sadness, fear - were so, so strong. Betita is an exceptional narrator, and the use of poetry - beyond the verse story itself - is exquisite and beautiful.

Verse is the only way this story could be told, otherwise it would be unbearably depressing. The story ends hopefully yet still feels unresolved. Land of the Cranes is a ripped-from-the-headlines type story that is moving and powerful. On one hand, I want to recommend that every teen and young adult read this book. But. It is also quite sad and may be too much for some readers.


Betita, Marisel, and Yanela will become friends whose stories you hold in your heart forever. If you are looking for a ripped-from-the-headlines story, this is the one to read first.


The themes are heavy and sad. The story takes place in an ICE (Immigration and Customs Enforcement) detention center. Violence, racial slurs, and descriptions of inhuman living conditions are detailed in the plot. They are specific, but not gory or over-the-top. There is also a scene where one child character tells another about being sexually assaulted.

Type of Book:
This is a novel in verse, narrated by a girl who is seeking asylum in the United States.
Educational Themes:


This is Betita's story, not just about her experience with immigration, but also as a young girl separated from her father and worried about her mother. While readers may not be in a detention center, Bettita's feelings are universal and can open discussions with children in similar situations.

The "setting" for the story is the ICE detention center. While the general theme is immigration, the novel dives deeper into two scenarios. Betita and her family, who are seeking political asylum, and Marisel who is a Dreamer and is allegedly "protected" from the situation she is now in.

Upon her arrival, Marisel takes the baton, as it were, from Betita. Although Betita still tells the story, there is a marked shift in the plot that allows readers to pull their emotions into "action." What words would your reader use to describe Marisel? 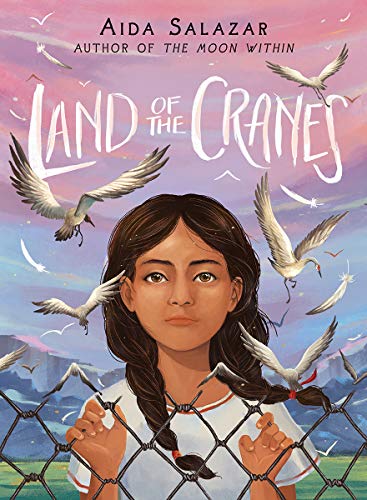