Yes, Donatella "Tella" Dragna (16) saved her sister Scarlett from an arranged marriage and freed them both from their father’s wrath. It wasn't easy and she struck a deal with a criminal from Elantine's Most Wanted list. Now, it is time to repay her debt, and he wants something no one has ever been able to find: the real name of Caraval’s Infamous Master, Legend. To discover what no one ever has, Tella must engage in Caraval once again. And once again, winning is her only hope of seeking what she must. As the games begin and the sun sets, Tella finds herself in a twisted world of lies, deceit, and tricks. She has no choice but to repay her debt, but is that really possible?

BTSYA / Teen Reader (19):
Legendary somehow manages to be an even better novel than Caraval, which is an amazing feat given how much I enjoyed the first book. At first, I was hesitant about the plot following Tella instead of Scarlett. Tella was a lesser-known female lead, and I wasn't exactly a fan of her. My doubts were quickly proven wrong as Tella manages to be an even better protagonist than Scarlett. With her strong heart and hopeless romantic tendencies, I found myself becoming extremely invested with just how perfectly imperfect Tella was. She is the perfect character to engage in the events of this round of Caraval.

Speaking of the events of Caraval, this book doesn’t disappoint in being another twisting and captivating adventure. Every time I believed that I understood where the story was headed, things were revealed that pulled me back into the game. It’s certainly a page turner and something you can read in a whole night if you’re not careful.

The weakest link in the story surrounds Scarlett. I loved her in Caraval, but there are no new developments in her character. The plot points involving her seemed to be created simply for the purpose of keeping her character around. If it is to involve her more in the next book that's fine, but compared to how interesting Tella has become, I wish Scarlett had been able to equally hold her own and not become an uninteresting side character. I hope her character can be improved upon in the final book, but not at the expense of diminishing Tella.

In conclusion, Legendary and the Caraval series as a whole are a pioneer in this new era of young adult fiction. Despite the few flaws here and there, nothing can take away from just how enthralling this series is, especially Legendary. Much like the first book, I would recommend this for a teen audience given the mature themes that may be a bit too much for younger readers. This book is an amazing gift if you know someone who has already read the first, or to pair with the entire trilogy. I would certainly buy this book over borrowing it from the library. You will want to remember this story for years to come.


A thrilling, captivating, page-turning fantasy. Our teen reviewer warns that you might stay up way too late reading if you're not careful.

Type of Book:
This is the middle book in a fantasy trilogy that involves family, secrets, and adventure.
Educational Themes:


Read this for fun! 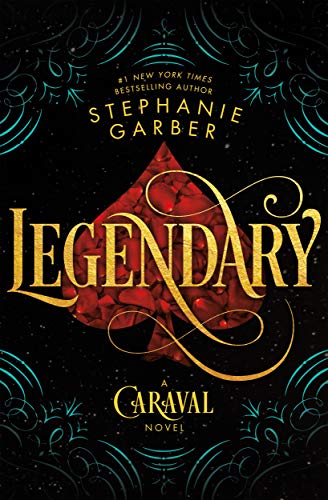 Song of the Current

The Hearts We Sold