It is 1924, and Milly and her family are spending their first year in America. Milly’s father works at Macy’s Department Store and Milly loves visiting the store after school. While Milly and her family appreciate the fun of New York City and the festive decorations, the advent of Christmas makes them homesick for Poland. Milly’s family is not alone. Many of her Papa’s coworkers are recent immigrants from other countries and Milly hears them talking about how much they miss the holidays back home. Milly has a special idea to bring cheer to Papa and his friends and all the immigrant families. She takes her idea straight to Mr. Macy himself. Mr. Snidely doesn't like the idea, but Mr. Macy heartily endorses the parade and he and Milly start a new holiday tradition that is “a little like the old country, a little like America, and a little like something entirely new.” Milly and her Papa proudly march in the very first Macy’s day parade.


This is a book that appeals to both children and parents. From a parent’s perspective, it provides additional historical context and whimsy to an already treasured American tradition of the Macy’s Day Parade. From a child’s perspective, the plot moves at a nice pace, the central character of Milly is appealing, and the illustrations are striking and unique. For both children and parents alike, the values of the book are positive and enduring: the importance of family, heritage, and tradition, and at the same time, the beauty of embracing other cultures and creating new traditions. Kids ages 4-8 will grasp the book’s full nuances and themes, but the basic story and colorful department store and parade scenes are also very appealing to toddlers and preschoolers.


This book has quickly become one of my twins' all time favorites. I have lost count of how many times they have asked me to read it to them! My toddlers were immediately drawn to the whimsical and detailed illustrations of Brett Helquist (also illustrator of Lemony Snicket’s books). They were intrigued by the distinctive, angular faces of the characters. They also loved the festive Christmas scenes outside and inside Macy’s and excitedly pointed to all the toys and decorations naming things they knew how to say. They found the character of Milly appealing, pointing to her and giggling at her adventures in the store. Hands down, their favorite part of the story was the end with the lively parade scenes. They loved the scenes of the clowns and animals and costumed workers marching in the parade. Their favorite part of all was when Milly rides the elephant from Central Park Zoo in the parade. They have turned to that page in great anticipation so many times that the page now has a small tear in it to prove their affection!


I really loved this book. I thought author Shana Corey did a lovely job of intermingling fact and fiction to create an enduring American heritage and immigrant story. I liked the author’s note at the back of the book which explains the history of the Macy’s Thanksgiving parade and the immigrant origins. I found the fictional elements of the story such as the characters of Milly and her family to be engaging and spirited. Milly serves as a good role model for young children - creatively coming up with an innovative idea to help her Papa and his friends and not being afraid to go to an important person to propose a new way of doing something. I wasn’t surprised my twins liked the book as the story is engaging and fast moving and the illustrations are very colorful and detail oriented. They enjoyed pointing and trying to name all the people and toys and animals in the book to the best of their toddler capabilities! My favorite part of their reaction to this story was that on Thanksgiving morning as we watched the Macy’s Parade on TV, they danced excitedly back and forth first pointing at the parade on TV and then racing back to the book and pointing to the parade in the book. So it was exciting as a parent to see them make the connection at such a young age. I could tell they appreciated the real parade more as a result of having looked at the book so many times.

Type of Book:
This is a fictionalized version of the history of the Macy's Thanksgiving Day parade.
Educational Themes:


This book has a very strong educational and multicultural learning component with its immigrant-oriented storylines. As my children grow older I look forward to having more detailed discussions with them about what it must be like to leave the only country you have known and start over in a new place with different words, language, foods, and customs. My twins’ own fraternal grandparents are first generation Polish immigrants so I especially appreciated the story of Milly’s family and look forward to relating the story to the experiences of my little ones’ very own “Babcia” (Grandma) and “Dziadek” (Grandpa) in the years to come.

Reading Level:
3.6
Recommended Age To Read By Yourself:
8 to 12
Recommended Age To Read Together:
2 to 6
Age of child:
Read with two-year-old twins (one boy, one girl)
Purchase Recommendation:
Buy. I would purchase this book for a friend or family member. I have personally recommended it to my mom’s group in fact. I think it is one of those classic books that kids will enjoy year round and that parents will especially enjoy pulling out each y 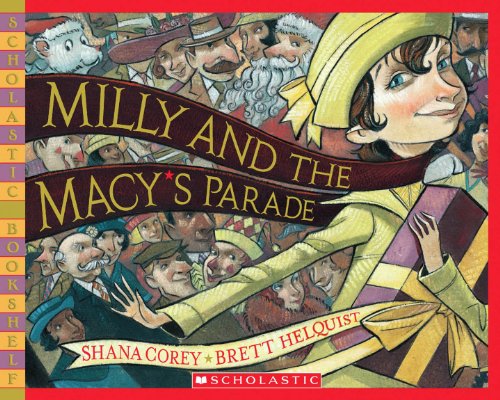 Night of the Moon: A Muslim Holiday Story

Three Cheers for Catherine the Great