Pure awesomeness ... #STEM #STEAM and everything in between ... @MomandKiddo has the Best #PictureBook #Biographies about Women #Trailblazers http://bit.ly/32jkslf #kidlit #WomensHistoryMonth


Gabe (10) has a passion for learning. He has been accepted to the Summer Center for Gifted Enrichment (S.C.G.E.), a 6-week camp where he can hone his math, poetry, and logic skills. The S.C.G.E is also known as the "Smart Camp for Geeks and Eggheads," which worries Gabe, because his soon-to-be stepbrother Zack from Los Angeles is going to the camp, too. Gabe feels like he has to change, so he can be popular like Zack. In order for popular kids, such as his soon-to-be step-brother Zack, to like him. He shouldn't have worried! This so-called Nerd Camp is going to be his craziest summer ever. From midnight canoe rides to doing math problems while sleeping, Gabe finally realizes that, despite their different interests, he and Zack can actually be friends.

BTSYA / Teen Reader (13):
The story is very funny, well-written, enjoyable, and lighthearted read. It relates to the inner nerd in all of us. Gabe’s proof diagram, which depicts whether he is a nerd, is a unique aspect of the story. It moves through each chapter and the jokes scattered through it make it enjoyable, too. Gabe made the diagram to prove to Zack that he wasn't a nerd, but eventually realized that he is who he is and no one can change that. I am glad Zack wasn’t a bad person and accepted his step-brother just as he is. He broke the stereotypes of  popular kids being mean to everyone they meet. While Zack wasn’t as academically smart as Gabe, he was smart in other things, such as sports.

Nerd Camp is so refreshing. There isn’t much representation of "cool" nerds in the media. Even shows like The Big Bang Theory, depict genius Sheldon Cooper as an anti-social man-child. Elissa Weissman shows readers that being nerdy can be fun and not all smart people are awkward. Gabe was just as popular as Zack, and he made friends just as easily as the stereotypical "cool" kid. She helps readers see that you can't label a person with one word, because everyone has something interesting about them. Yes, people can be friends, no matter their interests.

No matter how you view yourself, Nerd Camp is fun to read. It got long at times, but the message is good. I recommend Nerd Camp for people around 10 years old.


Readers of all stripes - self-described cool kids, nerds, and geeks - will all find themselves in this middle grade novel that celebrates accepting and being yourself! A perfect read for kids before heading to summer camp!

Type of Book:
This is a middle grade fiction story about being at summer camp and getting to know someone about your age who is going to be your sibling.
Educational Themes:


This is a book meant to be enjoyed for fun, but the lessons about judging others, self talk/self esteem, and adjusting to life changes can be great topics of conversation. 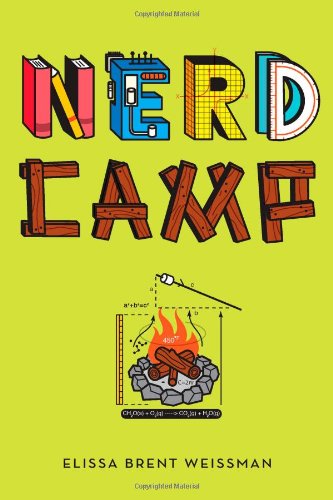 Be a Genie in Six Easy Steps

The Writing on the Wall

A Couple of Boys Have the Best Week Ever

Don't Vote for Me