While working with his dad at Mr. King's house, 12-year-old John Fischer (aka Little John) meets Gayle (8) when he hears her singing in a tree. She is in foster care because her parents "flew away." The foster family, which lives next door to Mr. King, abuse Gayle, and John wants to protect her. John's family is also in tatters. His father is an alcoholic and his sister Raelynn died after falling out of a tree (an accident Little John feels responsible for).

While playing with Gayle one day, John gets a small cut. When Gayle starts singing, the birds gather and  heal his cut. Mr. King hears her voice, and offers to pay John $500 if Gayle will sing for him. Although Gayle finally agrees, something happens, and she gets scared. Ultimately, John's deal with Mr. King is uncovered and John gets in trouble. Nevertheless, his parents take the money to pay the rent, because without it, they will be evicted. John, however, decides to give the money to Gayle. Can Gayle's magic save them all?


Little John and Gayle are characters that tug at your heartstrings. Your hope for them keeps you turning the pages.


Alcoholism, abuse, and the death of John's sister are part of the plot, but do not occur "on screen."


Because of its "link" to Anderson's story, Loftin's tale adds nice variety to classic literature. I liked Nightingale's Nest and found it very thoughtful and human/ The characters are believable and their struggles are very real. Little John is a well-rounded character. His handling of the complicated situations was not ideal, but very engrossing. I also appreciated the subtlety when weaving in the magical realism. Too many stories have very overt uses of magic, which becomes very dull. My only issue is how Little John's mother is portrayed. Her mental state was understandable, but justification for it was slightly excessive. Using Raelynn as a mirror of Gayle was predictable and weakened the mother's struggle.


This story really hits the heart strings abecause you get a front-row seat with a 12-year-old boy struggling to help keep his family afloat and still trying to have fun as the child he is. Gayle helps him with this; her voice is magical and can heal wounds and illness. Mr. King  becomes obsessed with recording her voice. We get to see how hard his decision is: betray Gayle or help his struggling family.

Nightingale's Nest is truly touching story, but it was also hard to read because of the tough subjects it touches on. For me, it was a great story hat shows how there is always a light in the toughest, darkest times.


This is a thought-provoking story. You're turning pages to be with Little John and Gayle. It is a book that has stayed with me well beyond finishing it.


Gayle's magical abilities are a very small part of this story. There are a number of "real world" themes that can open young readers eyes to foster care, grief and death, alcoholism, child abuse, poverty, and mental illness. Because of the way they are portrayed, there are opportunities to discuss the topics in a healthy, positive way. It would also be interesting to ask readers what they would do if they were in Little John's shoes. 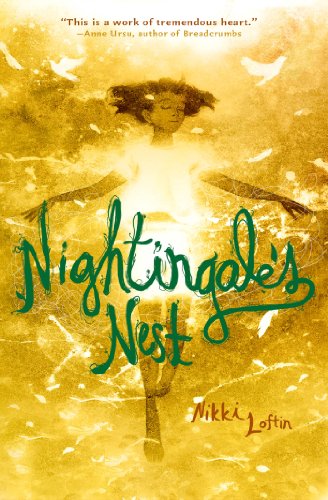