Alfons Heck and Helen Waterford are teens living in Germany. It is the late 1930s, and while the country is free, the two live very different lives. Heck, an Aryan, is a fanatic follower of Hitler's Youth Movement. Helen, a Jew, is married and about to have her first child. When Hitler takes over, little changes for Heck and he is having the "time of his life." He becomes a commander in Hitler's Youth at age 16. Helen, on the other hand, is struggling to survive. First she escapes to the Netherlands, where she hid until she was arrested and sent to Auschwitz.

BTSYA / Teen Reader (Age 13):
This is a story with a very powerful message that shouldn’t be ignored. I recommend this book to anyone who wants to learn about World War II. Not only do you learn about Heck and Waterford, but you also get lots of information about the war itself (told in a non-boring way!). What made this interesting for me is that you rarely get information from someone who was part of Hitler's machine.


Exceptionally told story makes life in World War II very real for today's readers. Readers will feel the emotions on both sides of the German conflict: a boy who believed in Nazism and a Jewish girl trying to save her own life.


The diary entries can be a bit confusing. There were times when I wasn't sure who the narrator was (Alfons or Helen). It would have helped me if the book had some pointers up front explaining which part belonged to which person.  The story focuses on the most important days, so readers don't get a sense of what the characters would be doing on a "normal day."

Type of Book:
This is the real-life story of two teens growing up during the Holocaust. It is told in diary format.
Educational Themes:


Because the diary entries can be a bit confusing, it may be helpful to create your own character worksheet. Describe an event (in the middle) and add Alfons' description on one side and Helen's on the other.  What does your reader think about these characters? Was Helen completely sympathetic? Alfons completely evil? What influenced their choices - were they all external? 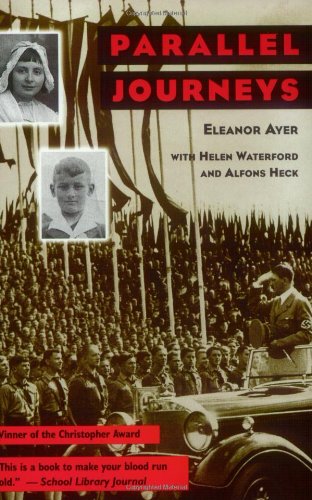