As the fourth born child, Four-Girl has always been shunned by her family. Because four means death, Four-Girl’s family couldn’t bear to give her a proper name. They see her as a mischievous devil so she spends most of her days as an outcast. After talking with a strange raccoon, Four Girl embraces her “devilish” nature and uses her unshakeable devil-face to scare off everyone. Everyone but the acupuncturist who sees through her act. After that, Four-Girl finds herself drawn to “foreign devils” and Jesus Christ. She sees visions of Joan of Arc and decides to learn more about Christianity. She converts and takes a new name: Vibiana. Christians in China were not welcome, and Vibiana leaves her homeland to find her true calling. During her long journey of faith, Vibiana faces many painful choices and loses much more than she once thought.

BTSYA / Teen Reader (17):
Saints is the second book in the Boxers & Saints duology by Gene Luen Yang. Saints is on the shorter side compared to Boxers, which makes for a nice quick read! Yang continues his examination of religion and revolution in a multifaceted light. No one character is good or bad, right or wrong. Readers get the opportunity to see where Vibiana and Little Bao’s stories begin to intertwine, as well as see how their roles play out in the end.

Yang also made some sweet artistic choices in his depictions and golden coloring of Joan of Arc. I again really enjoyed his expressive art. It just added to the intrigue and animated feeling I saw pouring off the pages. Gene Luen Yang brings the duology to an end with great closure and storytelling.

I definitely appreciate the list of resources provided at the end of the book. It was a great start for further reading on the Boxer Rebellion. Readers may also want to be aware of the themes and drawbacks presented in Saints. There's a lot of bloodshed depicted, but Saints isn't quite as action-packed and eventful as Boxers was. I recommend Boxers & Saints for readers 12 and up. The set would make a great gift for fans of graphic novels and history.


Readers who like illustrated history and are curious to learn about events they've never heard of will find Saints an excellent choice that will leave them wanting to know more.


The story is about a cultural and religious war. There is a lot of bloodshed depicted in the illustrations, and while it is toned down with the same cartoonish style as used in book 1, the violence may still disturb some young readers. Vibiana floats the idea of marriage with another character, but it ends up going nowhere as she becomes a “maiden warrior.” There is also a character who is an opium addict, which might not be the most pleasant image for some readers

Type of Book:
This is a graphic novel representation of Chinese history.
Educational Themes:


Saints (and its companion Boxers) are illustrated histories of the Boxer Rebellion in China in the late 1800s. It is a piece of history not often taught, and despite the fact that the event took place more than 100 years ago, there are still pieces to the story that will resonate with young readers today.

The author includes details of his research and resources at the end of this book.

Reading Level:
3.0
Recommended Age To Read By Yourself:
13 and Up
Recommended Age To Read Together:
12 and Up
Age of child:
Teen STAR Review Team, Be the Star You Are!™ . Reviewer's Age: 17
Purchase Recommendation:
Borrow if you don't know much about Yang or his writing style. Buy if you love graphic novels, books with diverse characters, and history. 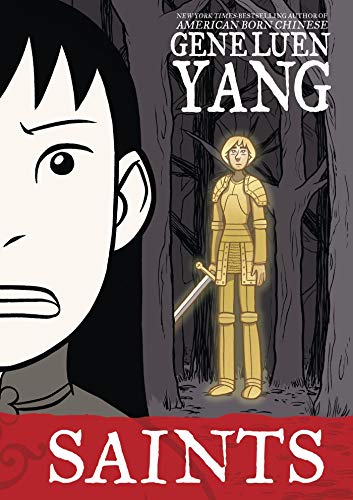