We’re offering some steps brands can take to directly support the individuals and organizations who are working to dismantle racism and white supremacy.

What else would you add to this checklist? Please feel free to reply with your recommendations. #blacklivesmatter


World War II is coming to a close; thousands have already died. Not only soldiers, but starving and poor refugees trying to flee the war. Among the many refugees and civilians aboard the Wilhelm Gustloff are four people whose lives come together on this sail toward safety: Florian, Alfred, Emilia, and Joana. They come together in hopes of survival and discover that there are worse things to come. They each hold a secret, which ultimately, could cost them their lives.

BTSYA / Teen Reader (16):
Salt to the Sea is an eye-opening read. Many know of the Holocaust, but no one has ever heard the tragedy of the Wilhelm Gustloff, the worst casualty of World War II. Through the changing perspectives in the book, I learned about so many other aspects of the war as well. The characters had their own backstories and some very shocking secrets to tell. Their flaws and suffering made them seem real. They all made you feel things.

Many people will enjoy the short and suspenseful chapters. They certainly encourage me to keep reading. Readers need to watch out for several things: violence and foul language. The language was not enough to take away from the story's greater lesson. With Salt to the Sea's story of suffering and humanity, I recommend it for anyone 13 or older. If someone is interested in history or World War II, this is a great gift.


Riveting details and very real characters transport readers to a little-known event in a well-known era: the end of World War II.


There is mature language, sexual situations, and violence throughout the book. Although it has a lower reading level, it is meant for teens and young adults (i.e., high school and older).

Type of Book:
This is an historical fiction novel about a true event of a refugee ship with thousands of people fleeing Prussia at the end of World War II.
Educational Themes:


This is a book that could spark greater interest in books about refugees in general and the Wilhelm Gustloff in particular. 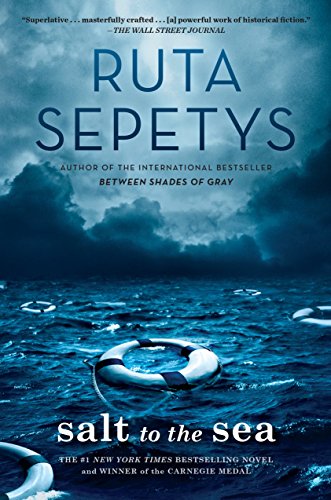 The Grand Escape: The Greatest Prison Breakout of the 20th Century