More than just a talented singer, Glenn Burke was an exceptional athlete. He excelled in both baseball and basketball, and even though he never played football, he had a talent for it. Although he attended college on athletic scholarships, he moved from school to school, as academics weren't his thing. At 19, he signed a contract with the Los Angeles Dodgers, and his Major League baseball career began. While Burke was moving through the various minor league ranks, gay people were becoming a social target.

Burke kept his sexuality to himself. Although teammates and managers suspected he was gay, he did not come out publicly. When the Dodgers General Manager tried to pay him to get married, Burke refused. Ultimately, though, the homophobia broke him. He quit the game and ultimately saw that being himself was more important. This is the story of his journey to self-acceptance.

Parent Perspective:
Although Glenn Burke's name is in the title, there is so much more to this biography. Interspersed with Burke's story are narrative details of other significant and/or influential "players" of the time: Anita Bryant, Harvey Milk, Tommy Lasorda, Bryant Gumbel, and others. There is also a lot of social contexts, including the rise and impact of HIV/AIDS and homelessness, among others.

As interesting - and in some cases fascinating - the information is, it is uneven in presentation. Chapters bounce between events in Burke's life to other events happening at the time. The detailed US gay rights timeline and the MLB farm system charts are awkward add-ons and further represent the disjointedness of the book.

That said, this is still an interesting book. Readers just need to be aware that it will jump around a bit. Some readers don't mind that, others are very distracted by it.


Readers interested in baseball, curious about the 1970s, and nonfiction told as a story will find this an interesting read.


None noted. Burke is involved in relationships, but they are not explicitly detailed.

Type of Book:
This is a biography of LA Dodger player Glenn Burke, who was the first MLB player to come out as gay.
Educational Themes:


This is more than a chronological retelling of Burke's life and journey through the major league ranks. Burke doesn't always come off as a sympathetic figure, and his choices could be the catalyst for interesting discussions about behavior, choices, prejudice, and the unwitting impact of secrets or self-denial. 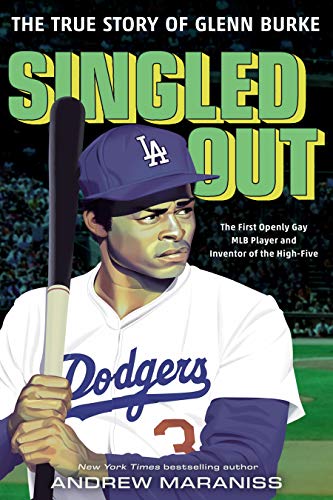 Queer, There and Everywhere: 23 People Who Changed the World

Baseball Then to WOW!

They Better Call Me Sugar: My Journey from the Hood to the Hardwood