One scorching summer day, Princess Shiori (16) flees her betrothal ceremony to protect her most dangerous secret. She’s breathed magic into a paper bird that’s flown away. She desperately chases it until she nearly drowns in the Sacred Lake. While the incident, fortunately, allows Shiori to delay her arranged marriage, she’s more relieved that no one found her magic paper bird. She doesn’t want to be sent away to her betrothed’s icy northern castle, but being banished from the kingdom of Kiata for wielding magic would be much worse.

Shiori cherishes her home in the imperial palace. She doesn’t need a husband to be satisfied, and life without her father and her six brothers is unimaginable. Less can be said for her frigid stepmother Raikama, whose beautiful appearance seems to hide a dark past. When Shiori follows Raikama into her garden one night, they inadvertently discover each other’s illegal magic. Raikama casts a curse upon Shiori and her brothers to preserve the secret.

She turns Shiori’s brothers into cranes; for every word Shiori speaks, one of them will die. She then shields their identities from the world, so no one can recognize and help them. Shiori wakes up stranded in the North, mute, with only her paper bird for company. She later discovers that her nation is embroiled in a war, now that the royal children have gone missing and the kingdom was deemed weak with no heirs. Far from home, without a voice and without a face, Shiori must find a way to break her stepmother’s curse and return to the palace to warn her father.

BTSYA / Teen Reader (16):
Six Crimson Cranes is a delightful retelling of a Chinese legend, along with an unexpected twist. Although I wished Shiori’s relationships with other characters were more developed, her journey is nonetheless admirable for her personal growth. With the weight of her six brothers’ lives on her shoulders, Shiori endures severe physical and emotional hardships alone. She matures considerably along the way, learning to loosen her prejudices, persevere in solitude, and comprehend a new complexity to life beyond her childhood cares.

Readers won’t be able to help but admire Shiori’s strength and dedication to her family, as well as her willingness to sacrifice her own comfort for the sake of others. This book is a perfect light read for teens, especially those who enjoy fantasy fiction based upon fairytales and folklore.


A story that will easily pull you into its flight. Shiori is a strong character and readers will not want to let go until they know what happens at the end.


None was noted by this reviewer.


Our reviewer notes that this is a retelling of a traditional Chinese fairy tale/folktale. Many of the stories in this genre cross cultures. What other stories does the book Six Crimson Cranes remind your reader of?

Our reviewer also commented that Shiori learned to "loosen her prejudices." What does this mean to your reader? What were her biases? How did she come to change her perspective? 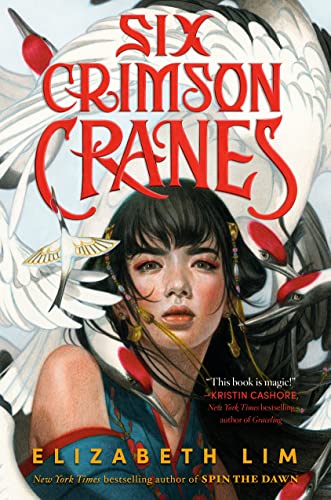