Three thousand years after the Third Invasion, Ender Wiggin the Xenocide is still alive and governing his colony on a foreign planet light-years away from earth. This new world is populated by human colonists and piggies (aka pequeninos), a new form of alien life.  The piggies are a complicated bunch and have a form of Third Life, which involves a ritual death or sacrifice. As Speaker for the Dead, it is up to Ender to decide whether to reveal the truth about the Bugger's War. Will ender make up for his mistakes in this sequel to The Ender’s Game?

BTSYA / Teen Reader (14):
Although they are still related, the problems and challenges are completely different from those of The Ender’s Game. This gave the book an interesting twist. Speaker for the Dead is a great read. It has some intricate subplots. Different characters and concepts cycle through the book as you read.

Card is a fascinating and imaginative writer, but the story's organization is sometimes out of whack. It would be easier to understand if it was a bit more simplified. Even so, this book was definitely very well written, and I give it 4 stars for imaginative storytelling and good character development. There is some confusion in trying to understand the characters and concepts, but I believe the right person will thoroughly enjoy this book.


Readers who love other-worldly science fiction, space-oriented video games, and/or The Enders Game will most definitely enjoy this sequel. It is an action adventure with underlying themes of mystery, religion, social mores, and personal choices.


Despite the middle-school reading level, this is a book for high school readers. There are several intersecting plot themes and lots of characters which could make the story difficult for some readers to follow.

Type of Book:
This is the second book in a 4-part science fiction series for teens and young adults.
Educational Themes:


What would your reader do in Ender's shoes? What motivated his choices? As he uncovers the mystery of the Bugger War, Ender has choices to make. The story can create some interesting discussions about personal choice and responsibility. 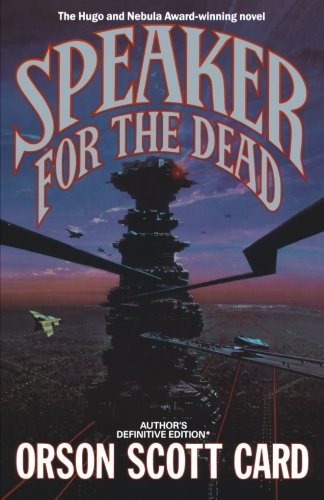