Orelia, Arran, Vesper, and Cormak are young adults from four very different worlds. Each was chosen to attend the elite Quatra Fleet Academy, a space academy. Picking up from the cliffhanger at the end of Light Years, life has transitioned from the classroom to the real world, and the stakes are much higher.

Orelia has been arrested for espionage. She is alleged to be a Specter spy who provided the secretive Academy to them. Ironically, thanks to Orelia, Cormak's squad (including Vesper and Arran) foiled a Specter attack. The praise these heroes receive doesn't last long, as new problems arise.

Vesper and Arran are assigned a new ship without Cormak and Orelia. Their ship is attacked and they are nearly expelled into outer space as a result. Cormak worries that someone has learned his true identity, putting his stay at the Academy in jeopardy. His relationship with Vesper is now unstable. Cormak is being blackmailed and can't tell Vesper who he really is. Orelia is assigned to help Lieutenant Zafir Prateek open peace negotiations with the Specters. While her role is mainly symbolic, she knows that the negotiations could result in peace. Last, Arran is awarded the Valor Medallion and instructed to figure out what happened to his ship. Was it an attack? Was it sabotage?

BTSYA / Teen Reader (14):
Supernova is the second and final novel in the Light Years series. There is sufficient action to have a gripping plot, without being overly confusing and or too fast-paced to follow. The ending also nicely wraps up the series.

The cast is the same four main characters from Book 1, and there is more emphasis on relationships (romantic and platonic). Even though there wasn't much attention to the plot, it was enjoyable to watch Cormak, Vesper, Arran, and Orelia's bonds grow, particularly after Light Years.

One downside of the novel is that it rapidly shifts among the four points of view. That could be confusing to some readers. I recommend borrowing the series from the library.


Fans of Light Years will not only find this an engaging, fast-paced space opera, but they'll enjoy the satisfying ending to the series after the big cliffhanger at the end of tha tbook.


There is a lot of emphasis on relationships, including romantic ones. The story is told from the points of view of each main character and shifts from person to person pretty quickly. Our reviewer noted that this could be confusing for some readers.

Type of Book:
This is the second title in a Space Opera duology.
Educational Themes:


Read this for the fun of trying to figure out Cormak's secret and how the four friends complete their time at the Academy. 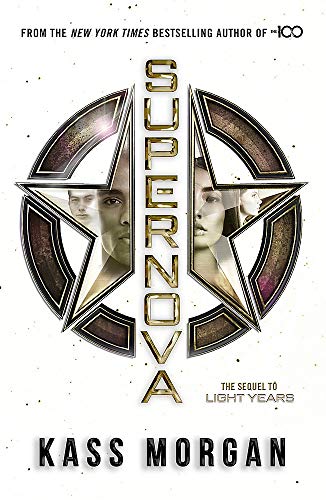