It's a rainy afternoon, and the gang is gathered in Rhetorical's cave. Ramses is convinced the others are cheating at checkers, and stomps away looking for a new diversion. When he discovers Rhetorical's samurai sword, everyone wants to know more about it. They all settle in as Rhetorical the Oracle begins his story ... and the gang is transported back to medieval Japan. Ramses, still holding the sword, is mistaken as a samurai and challenged to a duel. The usually belligerent Ramses is now scared - and so are his friends. What will happen to them? Will they ever be able to get home?


Lots of action and an engaging group of characters combine for an adventure series that is part fantasy part historical fiction.


This is an excellent story, though some readers - particularly older reluctant or remedial readers - may see the animal characters as too "childish." Minor: My daughter was quick to notice that one of the characters illustrated in the back of the book wasn't one of the ones in the story.


We started reading this as a bedtime story, so we would read a couple chapters each night. Without fail, our daughter would ask for extra reading and several nights was motivated to read by herself so she could find out what happened. When the story stopped to tell us what the characters were wearing or doing, she would ask us to stop and look at the front cover again. She really wanted to visualize what was happening.
Student review: I picked this book because it was short. I knew from the first chapter it was for a younger age group. I didn't like that there weren't many adventures or problems. The book is based on a good idea, but it could've been written better.


This is a great story. Ramses is the bully and he takes up a lot of space; but his friends know how to deal with him and kids can see an example of what works in cowing a bully. The story moves quickly with plenty of action. I liked the inserts with factual information, though my daughter didn't want to stop for that level of detail.

Type of Book:
This is an illustrated chapter book fantasy for transitional readers. The story is complemented by pages of history and fact.
Educational Themes:


There are several layers to this story. Although it is fiction, the authors add lots of factual information about Japanese culture and samurai traditions to complement the story. Each of the characters has a fairly well-established personality, and it would be easy to role play scenes, or talk through "what would you do" ideas. The way the story closes could also create an interesting discussion.

Reading Level:
3.8
Recommended Age To Read By Yourself:
8 to 12
Recommended Age To Read Together:
6 to 9
Age of child:
Read with and by a 7-year-old girl. Also reviewed by a student at North Junior High School, St. Cloud, MN, as part of the Use Your ABCs program.
Purchase Recommendation:
Borrow, at least. This is an engaging story. The ensemble cast of animal and human characters make it attractive to girls and boys alike.
Student reviewer: I would skip this book. 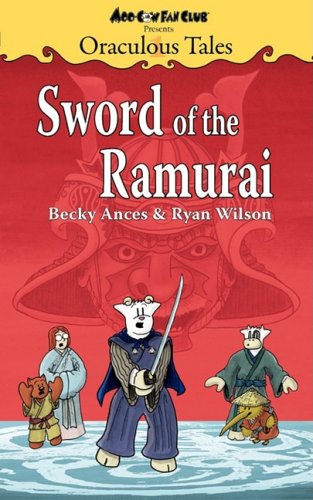 A Storm Without Rain: A Novel in Time