With her father now imprisoned in the Dungeons and Jasper Fletcher, Captain of the Pigeon, returning magic items to the citizens, life is becoming fairly routine. Pirate Hilary Westfield (aka Terror of the Southlands) is getting a bit antsy for an adventure.  When Captain Blacktooth invites her to his ship for a meeting, Hilary is certain he has a medal for her. Instead, Captain Blacktooth he chides her for "unpiratical behavior." It seems that she has broken the Code of Conduct of the Very Nearly Honorable league of Pirates (VNHLP). To remove the warning and become a member in good standing, Hilary must choose between one of two quests.

Before Hilary has the opportunity to decide on her quest, she has another problem: an urgent message from Miss Eugenia Pimm, Enchantress of the Northlands. She wants Jasper to come to her school, but he has gone to a conference for freelance pirates. Hilary and her First Mate Charlie make the trip to Miss Pimm's Finishing School for Delicate Ladies, but they are too late. Miss Pimm is missing! Did she disappear or was she kidnapped? Whatever the Queen's inspectors know, they aren't sharing it with pirates! Finding Miss Pimm is not the quest Captain Blacktooth suggested, but it is important and the Terror of the Southlands and her crew are going to solve the case. Avast! It's not that easy.

Parent Perspective:
What a fun, refreshing read. I like how magic is used in the story. Unlike other stories were specific characters possess magic, in August, all citizens can possess some magic and use it to their benefit.

Hilary is a pirate with a heart of gold and a moral compass that points true North. The cast around her is strong, and that includes the evil Mutineers. The adventure unfolds in a way that gives readers an aha moment: a villain can be a pirate, but not all pirates are villains. Letters, invitations, and inspector reports complement - and create effective pauses in - the main narrative. Vivid language adds to the imagery and is sure to have readers giggling aloud.

Highly recommended for those who love pirates, adventure, strong girls. This is an exceptional choice as a bedtime story or classroom read-aloud.


Pirates, mystery, magic, and friendship await readers ready to embark on this adventure with Hilary Westfield, aka Terror of the Southlands.

Type of Book:
This is the second book in a pirate adventure series.
Educational Themes:


This is a magical adventure to read for fun. 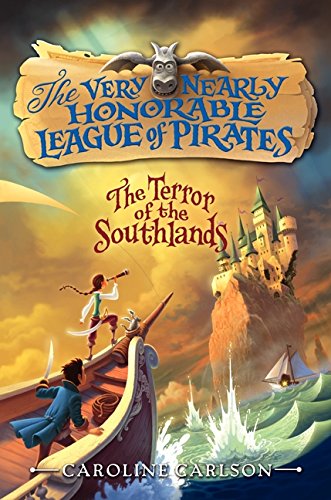 Alex and the Ironic Gentleman

The Book of Wonders

The Doorway and the Deep