Apollo was a glorious god at one time, but now Zeus has sent him to earth and he is a mere mortal: a normal teenager named Lester Papadopoulos. If he is to return to his godly form, he must restore the powers of five Oracles who have gone dark. Lester, Meg McCaffrey (his demigod master), and Grover, their satyr guide, have found the location of the next oracle. They are traveling in a labyrinth in hopes of reaching California quickly and freeing the oracle. The area is engulfed in wildfires and with Grover's help, they find shelter with a group of dryads. As it turns out, the shelter is the remains of Meg's childhood home. She lived there with her father until he was killed in New York and the house was burnt to the ground. That was when Nero took her in. Then Grover gets them a car so they can meet with Piper McLean and Jason Grace, friends of Percy Jackson who know how to navigate the maze. The group investigates a section of the labyrinth where the heat and fire seem to be emanating from. In the labyrinth, they figure out that Medea is working with Caligula to try to make him the new sun god. Jason helps them find Caligula’s fleet of 100 yachts. Lester and Meg complete battle Caligula before re-entering the labyrinth and completing their mission.

BTSYA / Teen Reader (16)b:
I have read all the books in The Trials of Apollo, and this was the best book in the series. There is a lot of fast-paced adventure, which really holds the reader’s attention. I enjoyed the battle scenes, and the theme of grief was very well done. It felt like the book was going back and forth a lot to different locations and it sometimes felt like the characters were going in circles. But this book has to be one of Rick Riordan’s best works.

The story includes violence and themes of sacrifice. Lester graphically stabs himself in an attempt to buy more time for his friends, and one of the main characters is tragically killed. In my view, this book is appropriate for any teenager, but not pre-teens or young children. That said, this book would make a great gift for teen fans of mythology.


Adventure, action, mythology, twists, friendship, and secrets ... The Burning Maze has something for everyone. Especially readers who love the thrill of reading on the edge of their seats!


Graphic violence. In one scene, the main character (Lester/Apollo) stabs himself, and it is described with lots of detail.

Type of Book:
This is the third book in a mythology series that has some of the characters from Percy Jackson in it.
Educational Themes:


Read this for fun! Here are some other fun things you can do with this book. 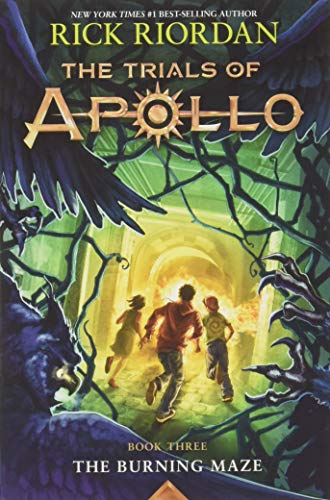 Aru Shah and the End of Time (A Pandava Novel)

The Tower of Nero (Trials of Apollo)