Caldella is sinking into the sea, and its only hope is an annual ritual performed by the Witch Queen. On St. Walpurga's Eve, the queen visits Caldella to find a boy to be sacrificed to stem the dark tide. Lina Kirk is certain that her brother Finley will be taken. She turns to Thomas Lin, the only person to ever have escaped the palace. When Queen Eva chooses Thomas. Lina is racked with guilt. She forced him to go to the festival to save her brother, he shouldn't have been there. Because of her love for Thomas, Lina offers the queen an exchange: let him go and sacrifice her. Something about that offer intrigues Eva, and she accepts it.

Lina is convinced that she can change her fate, but she only has until the next full moon to make it happen. She does not want to die, but winning over the heartless, unfeeling Eva will not be easy.

BTSYA / Teen Reader (16):
After reading this book, I realized the importance of different takes on sapphic romance in literature. Not only did Jasinska’s story put a spin on traditional gender roles, but she also introduced a romance between two unlikely characters in a beautifully written world of magic and mystery. I appreciated The Dark Tide’s ability to capture not only the beauty of magic, but also the darker aspects of witchcraft without the book becoming entirely focused on witch trials and persecution. I also enjoyed the multifaceted nature of our character’s personalities and how Eva trod the line between good and evil. Besides the sapphic romance, the lighter moments of friendship and familial love made this book worth reading as well.

I would recommend this book to older high schoolers or young adults. There are some violent scenes that would not be appropriate for younger readers. However, for readers who are looking for a dark fantasy with LGBTQ+ representation, I would say look no further. I would also recommend this story to anyone interested in morally ambiguous characters. And if you are a fan of magic of any kind, then this book is a must-read for you as well.

Parent Perspective:
Although time and place are not specified, the story is immersive and I felt I was on an island someplace in the North Atlantic. The foundation of the story is the annual sacrifice to stem the dark tide, but the heart of the story is its cast, particularly Eva and Lina.

Their backstories provide context for who they are and their actions, as well as provide an effective means of introducing other characters who, for the most part, do not influence events. The exception is Marcin, who is intent on undermining Eva is clear from the moment he is introduced.

That Marcin is sacrificed is no surprise. That it took the shrewd Eva that long to figure him out was a surprise. Because the depth of Eva's feelings for him (creating her blind spot) and their relationship lacked detail, his demise was unsatisfying. Similarly, the last scene, where the two girls reunite also fell flat for me.

None of the males in the story - Marcin, Finley, Thomas - come off as particularly noteworthy or likeable. I liked that Lina's and Eva's is not the only gay relationship. LIna was raised by two moms.

Overall, the story is well written and conveyed with suspense and in ways that push the readers to react (with feeling) to what is happening on the page. At times, though, the story can be hard to follow. The author seems to pause in the moment, steps back, and adds background detail ... but at inopportune times.

Bottom line: good, but not great.


Readers who like dark fantasy will enjoy The Dark Tide for its unique use of magic, suspense, and character development.


The story has a number of violent scenes that we would characterize as "detailed." They are not gory or gratuitous, but the descriptions are specific enough to classify them as graphic.

Type of Book:
This is a dark fantasy with magic and two gay characters.
Educational Themes:


The story is intended for enjoyment reading. Eva and Lina are interesting characters individually, and their personalities are amplified when they are together.

What life events influenced their approach to the world? What impact did they have on each other. Is it just romantic or is it something more? 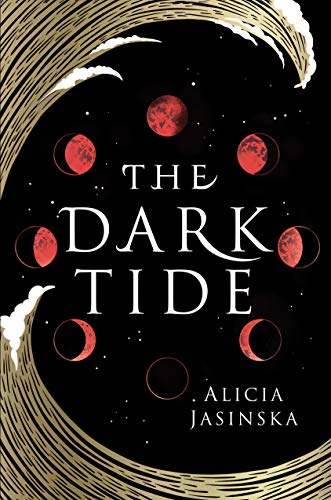 When We Were Magic

Girls of Paper and Fire

Among the Beasts and Briars

The Mermaid, the Witch, and the Sea