With their father traveling “all the time,” Moria and her older brother James rarely see their father. They have no mother, and their father’s short answer “she’s gone,” is not satisfactory. What’s worse is that over the last few weeks, Father has been even more short tempered. Mysteriously, he tells Moria that she needs to keep an eye on James, but she cannot tell him.

When intruders attack in the middle of the night, the children's world is turned upside down. Then the other shoe drops: Moria will be joining James at Baskerville Academy, their father’s alma mater. Although James and Moria knew this was the “family” school they did not know just how involved the family was until they got there. Their great-grandfather built the school and the Moriarty family Bible is kept under lock and key, hidden in the headmaster’s office.

Unhappy to be here in the first place, James is even more discontent when he discovers his roommate is a nosy, know-it-all Brit named Sherlock Holmes (whom Moria nicknames "Lock"). When the Moriarty family Bible goes missing, Lock, Moria, and a stubborn James are determined to find the thief. Someone is leaving clues to help James find it, and the trio discovers there is more to the Bible than being a memorial exhibit. It holds a key to a powerful secret.

BTSYA / Adult Reader Perspective (Age 25):
I liked many things about this book, including the mystery and the consistent questions of “Why?” and “what is so significant about a Bible?”. The beginning and end were captivating and made it hard for me to put the book down. In the middle, though, the story dragged on. There were too many “clues” and not enough action. I wanted to stop reading because it felt like the story stalled. The plot picked up again about the last 1/4 of the book. I couldn't put the book down until I finished it. I am hoping that the next book has more plot and a slightly quicker pace to the story.

This book is targeted for 8-12-year-olds. This is a good age, but even teens may enjoy it. Do not buy this book for younger readers because it does drag on and there are uninteresting parts, so they may lose interest. I would only suggest that it is worth buying if the individual picks it up at a library first and loves it and they want to read it more than once.

Parent Perspective:
An intriguing, fascinating, page-turner. The characters are vivid, with strong personalities. Lock is annoying and obnoxious, but has a human side; James is an angry teen who waivers between protecting his family and building a power base. Moria is a curious preteen who struggles with watching her brother “grow up” and control her feelings for Lock.

Slow, well-paced revelations add to the suspense of this engaging mystery. Moria, our narrator, skillfully offers recounts of events (as told to her by James) but also adds her own experiences and feelings.


This fresh take on a mystery thriller will draw preteens and teens in right away. It is a unique “prequel” to the Sherlock Holmes they know from literature and television.


There is some violence, including bully attacks and a secret ritual (don’t want to give it away). They are not graphically detailed but may make some young readers uneasy.

Type of Book:
Moira narrates the first book in this trilogy about a young Sherlock Holmes and his future nemesis James Moriarty.
Educational Themes:


Apparently, in Sherlock lore, there is a James Moriarty. It may be interesting to learn more about that relationship and then look at it in the context of Lock and Key. Great questions: Moria is our narrator. Do you think she is a reliable, unbiased reporter? How does her relationship with James change? Is it a more honest relationship or less honest relationship at Baskerville?

Reading Level:
4.9
Recommended Age To Read By Yourself:
9 and Up
Recommended Age To Read Together:
10 and Up
Age of child:
Teen STAR Review Team, Be the Star You Are!™ .
Purchase Recommendation:
Buy, if you love really good mysteries. This is one you could most definitely read again. Even though you know where it leads, there are details that you will have surely missed the first time around. 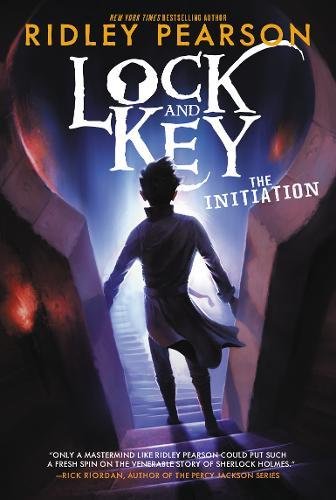