"Even if I could remember the specifics, replicating my experience of learning to read would not serve my students well." Margaret Goldberg in Overcoming Learners’ Bias to Give Our Students What They Need via @ReadingRockets https://bit.ly/3d9X1Sg @Right2ReadProj


Maren Partridge dreams of one thing only: getting her sister Hallie back. She's been in the hospital, in a coma for weeks because of a car wreck. While helping her grandmother Lishta handcraft dream sachets, Maren got an idea: give one to Halie. Giving a dream to someone without consent is not allowed, but Maren was willing to take a chance for her sister. She slipped a dream into Hallie's mouth when no one was watching. But someone saw her: Ms. Malo (aka Obscura Gray). She was the woman who left the shop angry because Lishta wouldn't give her all the nightmares she wanted. Now she was blackmailing Maren. By the time Maren figured out what Ms. Malo was doing with the nightmares and was ready to confess to her grandmother, it was too late. Maren and her mother were now trapped in an old, run-down theater and Obscura was carrying out the next part of her plan.

Parent Perspective:
An engaging story that is part mystery, part magic, part coming of age. At its heart, The Nightmare Thief is about family and not just the Partridges. Her friend Amos is dealing with an ill grandfather, and Ms. Malo's/Obscura Gray's motivation comes from her family backstory (which you learn about later). That different families have different magic is interesting, and the idea of handcrafting dreams is both clever and unique. I loved that the dream "factory" was in a typewriter shop.

To be honest, I wish there were more scenes with Lishta and Amos. They seem to have a lot more depth than what surfaced over the course of the story. On the converse, Obscura Gray is a kind of Cruella DeVille character who is flat and predictable. Another area that needed more context was Maren's tap dancing. She has a "shuffle ball change stamp" before we even hear that she takes lessons. These small sequences dropped into the story at different times. Given that the narrator is removed from the story, it would have helped to know if these moves were a "tell" for Maren's emotions or behavior.

Overall, a nice, well-paced read that tilts toward a happy ending. There are some loose ends, but readers will finish the book feeling satisfied. Given the depth of its descriptions and sensory aspects, The Nightmare Thief would make an exceptional read as an audiobook. It would also be a great bedtime read-aloud. If your reader is sensitive or can be influenced by what they read or hear, be aware that nightmares are part of the story. The publisher audience is 8 and up. I would lean toward 9 or 10.


Mystery, family, friendship, and the stuff that dreams (and nightmares) are made of. Preteen readers will find this engaging and unique, and as much realistic fiction as a fantasy adventure.


There is some violence, but nothing gory, graphic, or gratuitous. Obscura and Maren talk about different types of nightmares, some about creatures people have phobias about (spiders, snakes, bees).

Type of Book:
This is a fantasy mystery grounded in a very real world.
Educational Themes:


How would you describe the dream "factory?" Is it right to influence people's thoughts? If nightmares aren't good - and you had to have extra rules - why make them in the first place?

On a more specific level, Maren makes choices that have consequences. Was she "right" in crafting a dream for her sister? Should she have helped Amos or his grandfather with magic?

Most of the characters have typical names, but Ms. Malo's is indicative of her role in the story. Were there other characters like that? 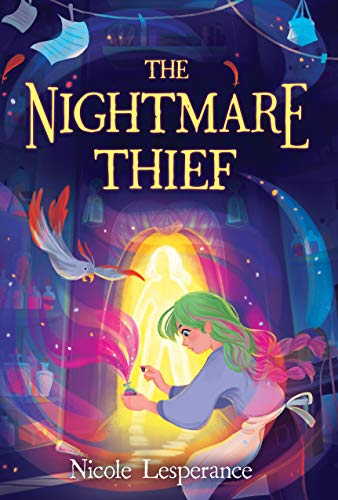