Repeated conflicts with other nations has left the United States in shambles. The country is a monarchy called Illea. Meet America Singer, a musical performer from the fifth level of Illea’s 8-level caste system. She very happy preparing for a future with Aspen, a servant who is a caste below her. When America is given the opportunity to enter the Selection, Aspen leaves her. The Selection is a competition among 35 young women to win Prince Maxon's hand in marriage, and Aspen is unwilling to stand in the way of a better future for America. America arrives at the castle heartbroken. As she tries to stay afloat in this opulent new world (and stop thinking about Aspen), America discovers there is much more to the prince. America's friendship with Prince Maxon isn't the only change. She realizes that her government and its people are much more complicated than she’s been led to assume, as well.


Neither its predictability nor homage to other books degraded the fun of reading The Selection.


This was a fun, quick read. Unlike many dystopian novels set in the United States, The Selection refers to other nations. It describes some of the ways that they are different in this new society as well, which I found really intriguing. At times the novel felt too lighthearted. Maybe if the conflicts with other nations and the rebel attacks had been explained a bit more, the novel would have had more gravity. Even though it was pretty obvious that Prince Maxon and America were developing romantic feelings for each other, I really enjoyed their conversations when the friendship first developed. That was when I felt the most connected with America. To me, The Selection competition mirrored current reality dating shows. It also had a slight variation to the tribute battle scenario in The Hunger Games or Battle Royale, as a way of entertaining the masses in an imperfect dystopian society. I would recommend this for readers 13 and older.

Type of Book:
This is the first book in The Selection dystopian fairy tale series.
Educational Themes:


This is a book meant to be read for fun. Although set in a futuristic world, readers can enjoy picking out references and events that are current to their own lives.

Reading Level:
4.7
Recommended Age To Read By Yourself:
10 and Up
Recommended Age To Read Together:
12 and Up
Age of child:
Teen STAR Review Team, Be the Star You Are!™
Purchase Recommendation:
Borrow, at least. If The Selection hooks you, you'll likely want to see how this fairy tale ends and get the other books in the series. 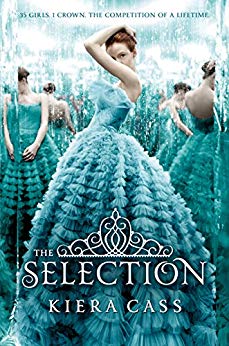