Shanghai, 1926. Juliette Cai and Roma Montagov are old flames from rival crime families: the Scarlet Gang and the White Flowers. Juliette, having spent the past few years in the United States, is now back in China, ready to take her position as heir to the Scarlet Gang. Fighting the White Flowers for control of the city becomes the least of her problems when Roma arrives at her club one day. He tells her that members from their respective gangs have been found dead, with their throats torn out by their own hands. Juliette first dismisses the news but grows unsettled when a man stumbles in and dies in the exact manner Roma had just described. When rumors spread about a madness causing the deaths, Roma begins an investigation that Juliette is quickly roped into. The two push aside their families’ history — and their much more personal one — in hopes of stopping the deaths. But like their feelings for one another, the threat to their home is more complex than it appears.

BTSYA / Teen Reader (16):
Retellings are tricky. They either follow the original plot too closely and end up being a chewed-up-and-spit-out version, or they have just enough twists to make them bearable but nowhere near (or above) the quality of the original. This book, however, is absolutely fantastic. These Violent Delights is now the standard to which I will hold any other retelling I read.

Chloe Gong has gathered all the basics of Romeo and Juliet — the family feud, the star-crossed lovers, the supporting characters — and breathed life into them, using them to make a creative story with suspense, action, and captivating themes. I love that she includes other conflicts beyond the Scarlets vs. White Flowers feud. There are struggles between Communists and  Nationalists,  and natives and the foreigners (colonizers, really) who came as part of the concessions that were established. This made for a richer story.

This is probably now one of my all-time favorite books, and the characters factored a lot into that. First off, Juliette. She is one of the few YA female protagonists whom I love. She’s strong and formidable, and her actions consistently show it. Far from perfect, Juliette does wrong things with the right intention (most often when her loved ones are in danger), and she apologizes when her actions cause harm. She also struggles to reconcile her Chinese heritage with her western-influenced self. As an Asian girl living in the United States, I could relate to that a lot. And there’s Roma — a breath of fresh air among the multitude of gruff, emotionally-stunted YA male protagonists. Even though he can be ruthless when dealing with gang matters, he’s sweet, caring, and isn’t afraid to show it. His father sometimes thinks Roma is too soft to take the mantle as leader of the White Flowers, and I think it’s interesting how one’s strength can have a drawback. As for the supporting characters, they’re extremely well-written. Marshall and Benedikt (Roma’s friends) and Rosalind and Kathleen (fraternal twins who are Juliette’s cousins) all have their own personalities, motivations, and flaws. There is also excellent LGBTQ+ representation among some of them. They’re not just token characters there for diversity points.

I recommend this for readers 13 and older because of the gory violence. Fans of the enemies-to-lovers trope will adore this book. It’s more of a revamped version of the trope, though. Roma and Juliette were first enemies by default (because of the feud), then they fell in love, then became enemies again (because of their own actions), and now … well, we all know where that trope leads.


This is Romeo and Juliet meets West Side Story meets ... read it for yourself. Our reviewer says this is now her standard for all retellings!


There is graphic violence in the story. Readers can skip over those parts when they come up and not lose the story.

Type of Book:
This is a retelling of Shakespeare's Romeo and Juliet , set in 1920s China.
Educational Themes:


Teen readers likely know the story of Romeo and Juliet, even if they haven't read the play.  As our reviewer points out, These Violent Delights integrates some of the memorable characters and events from that story into a story set in 1920s China. 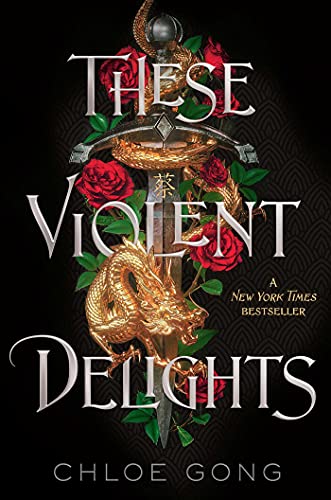 A Discovery of Witches

Forest of a Thousand Lanterns

Kingdom of the Wicked

Out of the Easy